The Esther and Jack Enright Mysteries 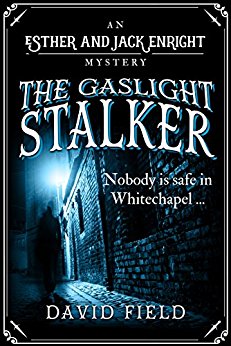 A double treat of reviews this week as I take a look at the two opening books in David Field’s series of 19th century detective thrillers, the Esther and Jack Enright mysteries.

David Field has produced an entertaining twist on the Jack the Ripper murders. We see the murders from the viewpoint of Esther Jacobs, poor but honest inhabitant of Whitechapel, and not *that* sort of girl. A lot of women she knows, though, are exactly that sort of girl, driven to the oldest profession by the lack of decent alternative ways to earn a living. And now somebody is killing them and doing disgusting things to the bodies.

Field provides a lot of detail but the whole book seems somehow slightly distanced from its subject matter. We know that people are poor, that prostitution is rife, and that many men and women retreat from the horrors of the world into the bottle, but there is no sense of the filth and the smell and the sheer awfulness of 1888 Whitechapel. Perhaps that’s a good thing. Field doesn’t spare us precise descriptions of which bits of his victims the Ripper cuts away and we might find it harder to enjoy what is essentially a light entertainment if we were constantly reminded of just how ghastly Esther’s life is with the cold, the poverty, the anti-Semitism, and the constant danger of death from violence or disease.

We do get a good picture of the rivalries between the City of London police and the new Metropolitan Police force, especially the detectives of Scotland Yard, somewhat inclined to trample over the professional pride of their divisional colleagues. Scotland Yard is represented by Percy Enright, uncle to the young and handsome Jack Enright whose beat includes Whitechapel and who is soon to set his cap (or policeman’s helmet) at young Esther.

I am not one of the army of Jack the Ripper groupies with their somewhat ghoulish knowledge of every detail of the crimes, but Field says that he has stuck to the facts of the murders and I’m happy to believe him. Where he has allowed himself free rein is with the details of the witnesses and the police investigation. The Enrights, uncle and nephew, do a much better job than the real police ever did, pursuing a line of speculation that takes us well outside of most people’s notions of who might possibly have killed those women. And Esther, of course, joins in, following suspects, ferreting out details and, as is the way with these things, finally almost becoming a victim herself.

Will Jack Enright save her? Will true love find a way?

This is the literary equivalent of ‘Lewis’ on TV. You don’t want to spend too long thinking about it, but the characters are attractive and the scenery is fantastic and it’s also very, very British and, in its way, very satisfying. Read it on a winter’s evening: best enjoyed with crumpets and honey.

This sequel to “The Gaslight Stalker” takes up where the first book ended with Jack and Esther planning their wedding. Esther, though, is determined to keep her financial independence for as long as possible. She takes a job working as a general clerk for a woman who is setting up a trade union to represent women workers.

It soon turns out that members of the union are being threatened by a man who breaks into their homes and leaves abusive notes, often stealing items of underwear as well. This is a matter for Scotland Yard and Jack Enright, who has been transferred there to work with his uncle, is soon on the case.

Like “The Gaslight Stalker”, this is a pleasant enough read, which touches on some significant political and social issues of the time (the poor conditions of many women’s lives; the first stirrings of political organisations for women; the early years of trade unionism) but which never really explores these. It opts instead to offer a competent thriller, which I imagine is what David Field’s audience wants.

As with “The Gaslight Stalker”, the writing is pleasant to read and the characters are sympathetic (or, in the case of the villains, amusingly evil) enough for us to be happy to follow their adventures. It is more thriller than whodunnit with the eventual unmasking of the villain bringing no surprises.

David Fields offers a solid 19th-century thriller with some peril (will Esther have to be rescued by Jack again?) and a nice romantic sub-plot. For readers who are looking for this in a book (and very many are) “The Night Caller” hits the spot nicely.