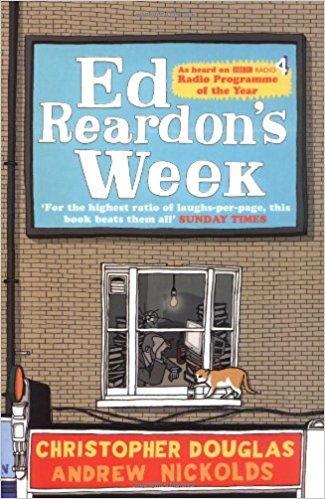 Ed Reardon is the star of ‘Ed Reardon’s Week’ which, from time to time, gets the odd half hour on Radio 4. Back in 2005 his adventures were transformed into a book (also Ed Reardon’s Week) which I have somehow only now got round to reading.

Reardon is a brilliant comic character, though sadly unaware of how funny he is. His first novel, Who Would Fardels Bear? was a great literary success. As a fan of the radio series, I know that Reardon was tipped as a young man to watch in a Sunday magazine feature back in the 1960s. Sadly, despite penning one episode of Tenko, his career has since then failed to flourish and he has been reduced to ghost-writing for celebrity cooks, sportsmen, and, for all I know, Victoria Beckham (although he is far too professional to admit the last one).

His divorce exhausted whatever funds he may have acquired from his early success and he is now reduced to living in a flat over a hairdressing salon where he is becoming increasingly bitter about a world that has rejected his genius in favour of (in his view) the inane wittering of 12-year-old television executives.

Reardon’s persona allows the authors to express their trenchant views on everything from the state of modern publishing through the inadequacies of the railway system to the doubtful joys of living in Berkhamsted (“the fastest-growing property market in Europe”). The writers are thus able to enjoy the privilege offered to court jesters, through the ages: saying politically incorrect things to poke fun at the modern world, whilst simultaneously insisting that these aren’t their views, just those of the appalling old dinosaur, Reardon. It’s great fun, though, like most satire, increasingly difficult to keep up as the idiocies of the life today overtake anything that the writers’ imagination can produce.

Back in 2005 when the world was young and London buses had yet to tell you to hold on because they were “about to move” thirty seconds after they had already done so, Reardon’s acerbic comments were still simultaneously wildly exaggerated and bang on point. If you have ever enjoyed anything with “Grumpy Old” in the title, you’ll love Ed Reardon, the archetypal grumpy late middle-aged man.

The characters of Ed and Jaz are stolen from George Gissing’s 1891 classic New Grub Street, which pokes less fun at the institutions of the day but concentrates its withering fire on publishing. Edmund is a genuine literary genius, but his books are not commercially successful. Jasper, on the other hand, is an appalling hack who turns out rubbish that he knows to be rubbish but which is carefully crafted to meet the market. Ed, inevitably, faces increasingly desperate hardship and literary obscurity, while Jasper grows rich and successful.

The modern Reardon is not averse to writing for the market either – he’s just not very good at it. He resents readers, publishers and, most of all, his terrible agent who long ago lost interest in him and who has now fobbed him off on Ping, a young woman whose Oxford education has left her, in Reardon’s view, unfitted for literary life, but who somehow seems richer, more assured and more successful than him.

The book could be a miserable wallow in grumpiness and self-pity (the original New Grub Street definitely veers in that direction), but, unlike Gissing’s novel, this is unremittingly funny, whether detailing Ed’s efforts to earn ten pounds by taking part in identity parades (“ the experience might furnish me with useful research material”) or his disastrous attempts at speed dating. But for writing friends, there is a particularly poignant humour in his increasingly desperate attempts to produce what his publishers demand.

“Basically the brief is: celeb cats and dogs grumbling about their owners. What does the Downing Street moggy really think about Cheri Blair?”

“Just cats and dogs?” I asked, out of politeness.

“No – rabbits, hamsters, whatever. You’re the author. Could even be a fun chapter by an Aussie insect about what it’s like to be eaten by Janet Street-Porter. It’s so you.”

Ed Reardon’s Week also avoids the tragic ending of New Grub Street. Ed [spoiler alert] does not die in a garret. Strictly speaking, if the authors were models of artistic integrity, he would. But his survival ensures that Radio 4 listeners will be able to laugh at him another day. And, until the next series, there’s always this book to keep us amused.