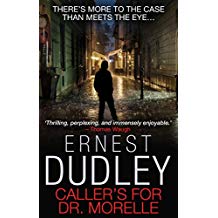 It’s Tuesday, so time for another Tuesday book blog. Endeavour Media (my own publishers) are republishing the Dr Morelle books from the 1940s and 50s and I’m going to write about these.

I’m a big fan of old-school detective stories (though I personally favour the 1930s when Simon Templar – the Saint – was at his buccaneering best) and I find these strangely fascinating. Partly it’s that Dr Morelle is a wonderfully inappropriate hero. He’s arrogant and rude and continually belittles his assistant, the mousey Miss Frayle. He’s a dark, brooding presence (the author, Ernest Dudley, rather over-uses ‘saturnine’ when describing him). Yet his heart is in the right place and he can be relied on to solve the crime, save the innocent and see the guilty brought to justice.

They are odd books. They are far from the Agatha Christie school of whodunnit, with Morelle often spotting key evidence that he slips into his pocket without Miss Frayle or the reader being able to catch a glimpse of what it is. Nor are they really thrillers, because there is a notable absence of tension. In Dr Morelle and the Drummer girl Miss Frayle is captured, tied up and lodged in a hidden room. We never have any doubt that she will be rescued. Morelle (in the stories I’ve read) is never personally threatened and if he were he would obviously overcome his assailant with the sword stick he carries. He is, after all a three times European fencing champion. What’s the appeal? Morelle is consciously modelled on Sherlock Holmes (he even lives in 221B, though as a doctor he inhabits Harley Street rather than Baker Street). He is a human calculating machine, telling poor Miss Frayle that “it is only by a process of skilled ratiocination that the truth can be arrived at”. Dr Morelle is essentially another incarnation of Sherlock Holmes, whose iconic status was the subject of last week’s book blog.

The plots aren’t as clever as Conan Doyle’s but the relationship between Miss Frayle and her employer is subtler and more interesting than that between Holmes and Watson and the 1950s atmosphere is a treat. How can you not love a story which features a character called Aces La Rue?