The Darkness by Ragner Jonasson 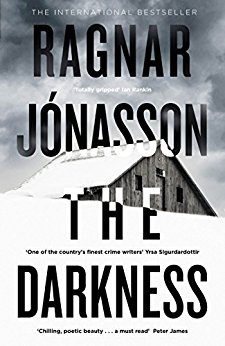 Yet another Tuesday book review. I never set out for this to be a book blog, but there seem to be so many books worth talking about.

This week’s review is The Darkness by Ragner Jonasson. I’m reviewing it because I got a free copy from NetGalley and my feeling is that if publishers give you books for free in the hope of seeing them reviewed, then it’s only polite to blog about them.

I asked for a copy of The Darkness because I’m a big Scandi-noir fan on TV and I’ve visited Iceland and know people from there.

From the beginning, I knew that my taste for noir was going to be well catered for. We have the weary police officer – a woman, as seems so often the case in Scandi-noir.

As was her habit, she spoke a little too fast, her voice friendly and upbeat, part of the positive persona she had adopted in her professional life… Alone at home in the evenings, she could be the complete opposite of this person, all her reserves of energy depleted, leaving her prey to tiredness and depression, the visions of the past haunting her, the fear of the future looming over her.

Our heroine, Hulda, reports to a barely competent boss. (Are there no competent senior male officers in Scandinavia? Not to judge from their detective fiction anyway.) She is coming up to retirement and her boss, anxious to sideline her, tells her to investigate an old case. So she ends up looking into the unexplained death of a woman found drowned by the shore more than a year earlier.

So far, so unremarkable. Hulda is a fully realised character with a complex back story which emerges as the book continues. You get quite a nice sense of Icelandic society – the long summer evenings, the isolation of everywhere outside Reykjavik, the continual worrying about money since the economic collapse, the beauty of the countryside and the ambivalent attitude to refugees. Much coffee is drunk.

As the story continues, though, the noir becomes rather dark, even for this genre. [SPOLERS IN NEXT TWO PARAGRAPHS]

There’s been some controversy lately about the Staunch award for fiction which does not feature any acts of violence against women. This book would not qualify, even if the initial murder victim did not count. By the end, there is only one incidental female character who is not dead or in prison for a long time. I won’t tell you who that is, just so as not to spoil the suspense. Men get off comparatively lightly, although one minor character is also murdered. People are hit with rocks, an ice axe, and a car, or buried alive. Iceland has one of the lowest murder rates in the world. Two murders in a year would usually be considered a lot but Hulda’s case is looking to bust every record.

Basically, in this story every time somebody receives good news, it seems a prelude to a nasty death. Although the pace is lively and the story is involving, it gets a bit depressing after a while. I quite enjoyed it, but it won’t be to everybody’s taste.

As a mystery, it is reasonably satisfying. There are clues (I missed them all, but they were definitely there) and you might be able to work out whodunnit before Hulda does.

The story was written in Icelandic and translated into English and this has led to the odd infelicitous choice of words. I’m not sure that I really approve of “pale white” whatever Procul Harum said, and “leafy suburbs” have very different connotations in England from in Iceland. Generally, though, the book reads well. But if this were a coffee, it would be a triple-shot espresso without sugar. Don’t say I didn’t warn you.