‘The Custom of the Trade’ by Shaun Lewis 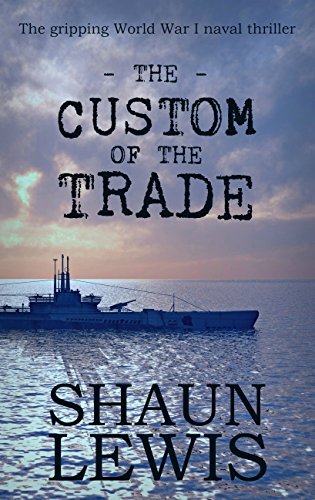 Shaun Lewis’s book takes us into the world of submarines in World War I. We are all familiar with stories of the horror of the infantry and artillery battles of that conflict and the world of battleships and destroyers is also something we are dimly aware of. People my age, brought up on Biggles, have some notion of what it must have been like to fly in those flimsy biplanes. But this is the first time I have read a book about submarine warfare back then. I didn’t even realise that there had been extensive use of submarines during World War I.

Lewis has served as a submariner and writes authoritatively about life below the sea. Much of the action of the book is based on real engagements and you get a definite sense of what it must have been like in the claustrophobic atmosphere of a submarine submerged on active service. A visit to the Submarine Museum at Portsmouth (I do recommend it) gives you the chance to see inside a late 20th century submarine. Life there must have been crowded and not particularly pleasant, but conditions were luxurious compared with those faced by the sailors at the beginning of the century. The story takes us through different classes of submarines, starting with those used for patrolling Britain’s home waters which, as they were at sea for only three days at a time, had no crew accommodation at all. The men slept on the floor and if, as often happened, the floor was covered in vomit, then they slept in that.

By the end of the story, our hero is commanding an E class submarine which offers more space, although the men often seem to sleep at their posts. This particular submarine is operating in support of the Gallipoli campaign and spends days submerged in the sea of Marmara. Fortunately for the crew, it has to surface regularly to replenish its batteries by running its diesel motors and these breaks provide the men with their only opportunities to breathe fresh air and bathe. Conditions would seem grim even without the constant danger from enemy mines and naval artillery. I mentioned “our hero”, and that is what he is. Richard Miller, despite his idiosyncrasies (his Christianity verges on the fanatical and he is a teetotaller, in a service where alcohol is almost a required social lubricant) is not a fully realised character. This doesn’t worry me as I am more interested in the detail of submarine warfare than the personality of the captain, but it may worry others. My feeling is that books like this, plot driven and quite concerned with historical detail, are not the best place to be overly concerned about character, but I have had many comments that my hero, James Burke, would benefit from more fleshing out and I suspect Lewis will face the same sort of criticism.

Miller’s romance with his “kissing cousin” is, similarly, not explored in any great depth. She is defined in terms of her support for the suffragist movement, which gives Lewis the opportunity to provide a fair amount of analysis of the political background to the fight for the vote. He approaches this rather as he approaches the details of the submarines, with a workmanlike methodical take which is much more interested in the politics than Elizabeth Miller’s personality. Again, I am sure that there are people who will criticise this, but I welcomed the chance to learn more about a movement which is more often praised in generalities than analysed in terms of the various factions and their interplay with the established political parties.

The sense of distance that I sometimes felt from the characters was reinforced by a slightly stilted dialogue. This may, though, reflect the way that people spoke during the First World War. Not being quite that old, I can’t say. At the beginning of the book I found it quite irritating, but by the end it seemed completely natural. I think it is a deliberate effect, if only because when Lewis is reporting the conversation of sailors rather than “officers and gentlemen” the language flows much more naturally. This does mean that Miller’s drunken, abusive commander, Thomas Mullan, comes over as one of the most believable characters in the book. He is also the most psychologically complex and I only wish we could have seen more of him.

The Custom of the Trade is an easy book to read. The prose is unpretentious and there is enough action to hold your attention through the technical detail. I enjoyed it, both as a novel and as a way to learn more about an area of conflict I was previously almost completely ignorant of. I would recommend it to anybody who enjoys stories of military history.