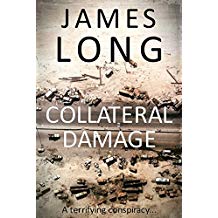 It’s a long time since I stayed up to read a novel. I’d almost forgotten how gripping a good thriller can be – and this is indeed a good thriller, but also much more than that.

The story is set against the background of the first Gulf War and it is, inevitably, political. It wears its heart on its impeccably liberal sleeve. The war, Long thinks, was fought as much to demonstrate the efficacy of the weaponry, and hence to build arms sales, as it was to liberate Kuwait. It’s not a view I’d necessarily agree with, but neither is it a foolish idea.

David Challis is a reporter who goes to war convinced of the justice of the fight and the necessity to use the most powerful weaponry to defeat Hussein’s Republican Guard. He is accompanied by a more cynical American reporter and a French photographer who is determined to show the terrible reality of the effects of war.

Meanwhile, in what seems a separate plot, a British arms manufacturer is developing a new missile and is not above some underhand practices to make it seem better than it is.

Everything comes together in the carnage of the Kuwaiti desert and then we’re off into straightforward thriller territory with the evil villains trying to cover their tracks with a string of bodies while the intrepid reporter tries to bring them to justice.

There’s a sub-plot about flying in the Second World War, suggesting that war has always been hell and that governments and Staff officers are prone to forgetting the impact of their policies on the ground.

The whole thing could be a terrible mess – especially if you are not entirely convinced about the liberal arguments against the level of force used against Iraqi conscript soldiers. It works though. The accounts of the weaponry and the ways it was used in the Gulf are convincing. The insights into the arms industry are convincing too. The Second World War material is impeccably researched and gives an authentic understanding of life as a navy flier back then. The nuts and bolts of the story work well and Long is simply an excellent story teller, and (although he changes point-of-view in an unfashionable way) I like his writing style, which is crisp and clear.

I’m not saying much about the plot details because there are a few twists and surprises. You’ll just have to take my word for it. It’s a very good story and a very good book.

Note that Collateral Damage has become a very popular book title. Make sure you buy the right one: https://www.amazon.co.uk/Collateral-Damage-James-Long-ebook/dp/B07BK6HWJH