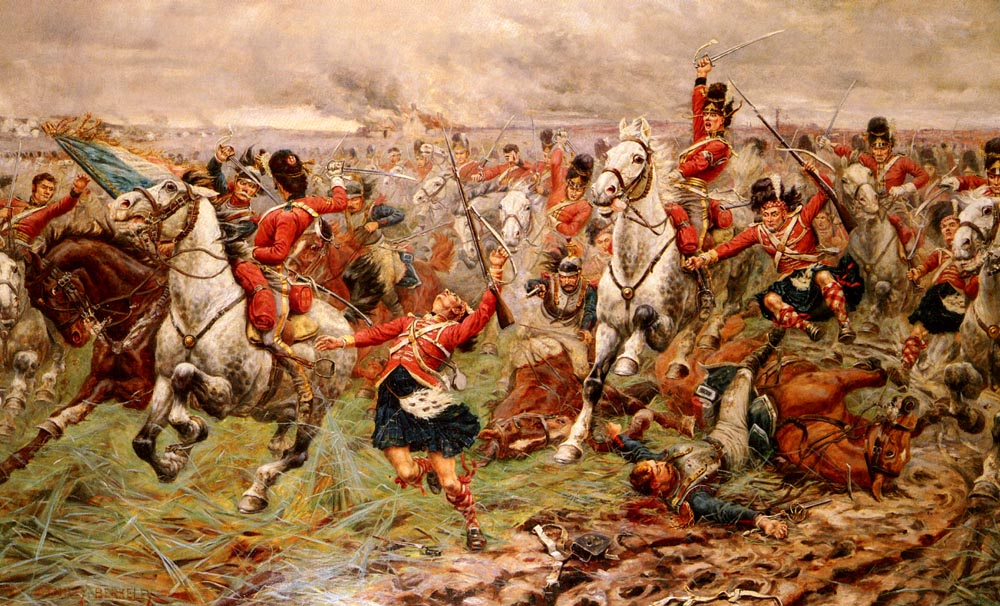 By the end of the 18th century, the main role of cavalry was to pursue and destroy a fleeing army. It also provided a mobile force that could be moved to support infantry in moments of crisis.

At Waterloo, as probably in some other battles, the cavalry, often held back behind the infantry, could be used to turn back units that were trying to flee the field – not a noble role, but an important one nonetheless.

The British cavalry was recognised as being brave and well mounted, providing a powerful force capable of inflicting significant damage on an opponent, but prone to getting, literally, carried away. Cavalrymen and their mounts tended to get caught up in the excitement of a charge and often overran the enemy lines significantly reducing their effectiveness on the field of battle. Wellington was famously suspicious of his cavalry.

“[There is] a trick our officers of cavalry have acquired of galloping at everything, and then galloping back as fast as they gallop on the enemy. They never … think of manoeuvring before an enemy – so little that one would think they cannot manoeuvre, excepting on Wimbledon Common; and when they use their arm as it ought to be, viz. offensively, they never keep … a reserve. All cavalry should charge in two lines, of which one should be in reserve…”

At Waterloo, Wellington generally held his cavalry back and when they did charge the result (as we shall see) was impressive but sometimes doubtfully effective.

The French cavalry were well trained and equipped but probably less well mounted than the British. On the other hand, at Waterloo the commander of French forces on the ground was Marshal Ney and he was a cavalrymen through and through, happy to lead cavalry assaults from the front.

The conditions at Waterloo were not favourable for cavalry. The heavy rain had left the ground muddy. The British were at the top of a slight rise which, given the condition of the ground, substantially slowed any cavalry charge. The lower ground between the two armies was very muddy indeed. From a 21st-century viewpoint it is not that difficult to understand that the mud slows the attack, but what is more easily forgotten is that it tires the horses. Very muddy conditions may slow a tank assault, but the tanks will not tire. They may advance slowly, but they will continue to advance for ever. Not so with horses. As the day wore on, horses became more and more tired and less and less effective.

Given the conditions, the role of cavalry was always likely to be limited but they were made even less useful because both the French and the British failed to deploy them properly.

In the assaults on Hougoumont and La Haye-Sante the French infantry was regularly repulsed and cavalry was ordered into support. Cavalry is almost totally ineffective against buildings, and so it proved to be in both these cases. Cavalrymen were lost for no reason whatsoever.

As the afternoon wore on without the infantry making significant progress against the British line, Ney decided to launch an assault with his cavalry. Forty squadrons (more than 8,000 mounts) rode directly to the British lines, taking substantial casualties from Allied artillery but continuing until they reached the British positions. At this stage all the Allied battalions formed squares, front ranks kneeling, bayonets fixed, with the men in the second rank ready to fire.

It is almost impossible for cavalry to be effective against a well-disciplined infantry square which does not break, unless it is closely supported by infantry or artillery, which Ney was not. The result was that the French cavalry circled the Allied squares, apparently in control of the ground but utterly unable to do anything to exploit this. Indeed, the continual fire from the infantry meant the cavalry was constantly taking casualties, while they were unable to inflict any damage at all on their enemy.

“Round and round these impenetrable masses the French horsemen rode, individuals closing here and there upon the bayonets, and cutting at the men. But not a square was broken; and a body of cavalry which, had it been wisely handled, might have come up at the close of day to good purpose, suffered, ere the proper time for using it had arrived, virtual annihilation.”

Why Ney, who was no great strategist but still an experienced soldier, led this charge without infantry support is one of the mysteries of Waterloo. With close infantry support he may have been able to break squares and inflict a decisive blow on the allies, but he didn’t and the day was lost. On several occasions in the afternoon Ney did ask Napoleon for infantry reinforcements and was told there were no reserves he could spare, so it’s possible that he used the cavalry without close infantry support simply because he did not have enough infantry available. It doesn’t really explain the waste of good cavalrymen, though. An alternative explanation is that some of the British troops were withdrawing in good order and this was mistaken for a retreat. At this point, doctrine would suggest that cavalry should be used to pursue the fleeing enemy. As the British formed squares, it became obvious that they weren’t fleeing at all, but by then the cavalry was committed to the charge. This does not seem an entirely adequate explanation. Ney was charging through artillery and as soon as it became clear that, far from fleeing in disorder, the enemy was forming squares, the obvious thing would have been to retreat without further loss. Instead, not only was the attack carried through, but it was continued for some time, even after must been clear that nothing was being achieved by it.

The British, too, threw their cavalry away for no good reason. The famous charge of the Scots Greys made a good painting, but achieved little, if any strategic effect. ‘Scotland forever!’ by Lady Butler. It was painted in 1881. Lady Butler had never been present on a battlefield

In the fighting around La Haye-Sante a Highland regiment had advanced somewhat over-enthusiastically and found itself facing annihilation at the hands of a much stronger French force. At this point the cavalry was used in its proper role of providing support to a regiment which was about to be overwhelmed by the enemy.

The Scots Greys moved forward at a walk (the ground was too uneven for the gallop shown in the picture) and passed through the Highlanders who rallied as the cavalry arrived. The cavalry now fell on the French infantry who had no time to form square.

“In vain our poor fellows stood up and stretched out their arms; they could not reach far enough to bayonet these cavalrymen mounted on powerful horses, and the few shots fired in chaotic melee were just as fatal to our own men as to the English. And so we found ourselves defenceless against a relentless enemy who, in the intoxication of battle, sabred even our drummers and fifers without mercy.”

Captain Duthilt of the 45th quoted by Grehan

The Greys should have been satisfied with their success and returned to the Allied lines, but having destroyed the 45th Regiment, they pressed on down the slope. Pausing only to harass another French regiment that formed up and successfully resisted them, they rode on until they reached the French artillery. However, they were not carrying the equipment needed to put the guns out of action, so they contented themselves with killing the gun crews.

“Then we got among the guns, and we had our revenge. Such slaughtering! We sabred the gunners, lamed the horses, and cut their traces and harness.”

Then, tired and disorganised they milled around uncertain of where to go next.

They were now in the thick mud of the plain between the two armies where their heavy horses, blown after their charge, were struggling to move beyond a walk. At this point a brigade of French lancers arrived on the field. The lancers, being lighter and fresh to the fight, were able to move much more quickly across the muddy ground and they fell on the Scots Greys without mercy.

Allied cavalry reinforcements were sent to cover the retreat of the Greys, including a brigade of Belgian-Dutch cavalry. Although British authors claim that they “attempted nothing more than a mere display upon the crest of the position” other accounts suggest that it was the entry of the despised Belgians into the fight that saved the Scots Greys.

The charge of the Scots Greys did massive damage to the 45th and saved the bacon of the Highlanders. By drawing French forces away from the farmhouse, it’s likely that the cavalry charge helped the men in La Haye-Sante hold on a little longer – maybe as much as two hours, which could have had a critical effect on the outcome of the battle. But the cost was enormous and largely pointless because the gains were made before the cavalry over-ran their objective and failed (despite being recalled) to turn back to their own lines. The Union Brigade (Royals, Scots Greys and Inniskillings) suffered approximately 600 dead and wounded out of 1,000 men, (including its commander, William Ponsonby). Looking at just the Scots Greys, of 24 officers who took part in the charge, 16 were killed or wounded.

Waterloo will be one of many subjects covered at the Malvern Festival of Military History where I will be one of the speakers on  panel about writing stories based around actual military events – like my books about James Burke.

I hope some of you will make it to Malvern. For more details go to https://www.enlightenmentevents.com/