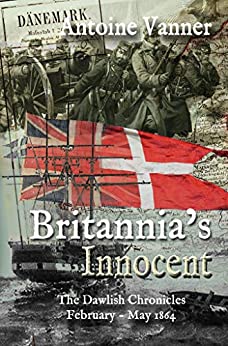 Palmerston is supposed to have said of the Schleswig-Holstein question that only three people understood it and by then one was dead, one had gone mad and he was the third and had “forgotten all about it”. I vaguely remember touching on it in school history lessons where it seemed specially designed to give school-kids headaches. So when Antoine Vanner makes the second Schleswig-Holstein war the background to Britannia’s Innocent in his Dawlish Chronicles series, he is taking something of a risk.

In fact, he explains the basis of the dispute really clearly, mainly by sketching out the key points (for example, he ignores the first Schleswig-Holstein war completely) and skipping irrelevant detail. His main point about the war (and, not being Palmerston, I’m going to take his word for it) is that it was almost entirely pointless. This allows full-rein for an extended essay on the futility and horror of much of modern warfare.

Our hero, Nicholas Dawlish, is still a young midshipman, waiting for his first posting as a Navy officer when the father of a friend of his offers him the chance to advance his career by serving on a ship that is being sent by British supporters of the Danes who are now at war against the Prussians and the Austrians. That’s a long and complicated sentence but that’s a fair reflection of this part of the plot with mysterious visitors and secret allies. The Odin is an ironclad with twin guns in a turret. She represents a break with the centuries of traditional warfare between wooden ships firing broadsides.

Vanner uses the book to illustrate different aspects of late 19th century warfare. Many of the strategic approaches developed then are still used today. The book starts with Odin engagedin commerce raiding – destroying civilian vessels sailing under Prussian or Austrian flags. Dawlish watches miserably as his captain destroys the livelihood of civilian ships’ masters, some of whom did not even know that their countries were at war, news of hostilities not having reached them before they started sailing for home.

The Odin is then ordered to Denmark where its guns should provide protection to Danish forces in a defensive position on the coast. There is much detail of the position of the force, supported by maps. Most of this passed me by but the book will appeal to the sort of people who enjoy re-fighting ancient battles and the detail provided will fascinate them. If you are not among them, it’s easily enough skipped over.

[I don’t think that the description here gives anything unexpected away, but people who are very sensitive about spoilers might prefer to read my edited review on Amazon: https://www.amazon.co.uk/review/R23UDPWPRZ7IBI.]

Dawlish is in charge of the guns as the Odin finally sails against the Austrians, opening fire on their siege works and doing some real damage. An Austrian shell, though, lands on the superstructure of the Odin which, unlike her armoured hull, is vulnerable. (Vanner is an expert on ships of this era and you certainly learn a lot about the practicalities of the naval warfare of the time.) As a result of the damage to the vessel it is unable to sail against the Austrians again until a vital part is sent from Britain.

The pause in the Odin’s operations allows Vanner to move Dawlish into the land battle. The strategy here reflects the move towards modern trench warfare. New technology, like the Prussians’ breech-loading rifles, is increasing the killing power of the soldier in the field. The sheer bloody awfulness of life in the trenches – the cold, the lice, the constant dampness, the fatigue – is well painted. Then comes the assault by the Austrians. A prolonged bombardment is followed by a mass attack of infantry. First there is shelling, then there is rifle fire, and finally the two sides are fighting hand to hand with bayonets. It is not heroic or glamorous.

The single ray of light in the darkness is the newly formed Red Cross which is kept busy treating Austrians and Danes alike. With a dreadful inevitability (given the sort of book it is) the Red Cross hospital is shelled and Red Cross doctors and nurses are amongst the dead.

After the brutal interlude of the land battle, the Odin is repaired and when the Austrians (now reinforced by Prussians) launch another assault she shells them from the sea, inflicting massive casualties. Dawlish sees it as a massacre.

“He knew already that he would regret it until the end of his life.”

There is more to come: an account of the battle of Heligoland, a real battle which the fictional Odin observes from a distance, a sub-plot involving an American Union vessel, but by now the story had run its natural course. It’s enough that Dawlish gets safely back to England and tries to put the horrors of his experiences behind him.

It’s not an easy read, though Vanner writes well. It’s the subject matter, not the prose, that wears you down. There is an awful lot in this book (the summary here has skipped over much of it) and most of it depressing. It’s true, though, that war really is hell and books that are honest about this are a valuable antidote to a lot of the romanticised versions of war that you read in so many novels. The book also shines a brilliant spotlight on the changes that were coming with the move from the warfare of the long 18th century (wooden ships, wind-power, solid shot, muskets) to the world of the US Civil War and World War I (ironclads, steam-power, explosive shells, breech-loading rifles). New tactics were developing around the new technologies. (The Battle of Heligoland was probably the last naval battle fought by ships firing in line broadside to broadside.) Vanner’s books are often built around the changes in (particularly naval) technology in this period and Britannia’s Innocent explores this theme. It’s a must-read for fans of naval history in the early years of steam.