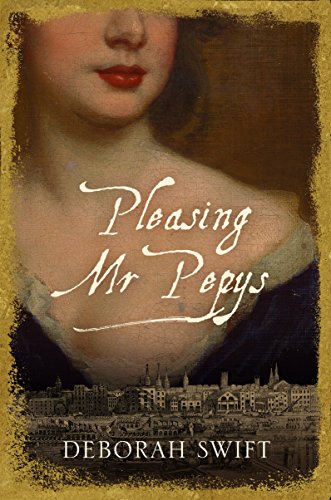 Deborah Swift has produced a remarkable work of historical fiction.

Samuel Pepys’ diaries provide an enormously detailed insight into the world of Restoration England and the personal life of a quite remarkable man. Swift has taken these diaries and woven them into a work of fiction that is part romance, part spy story, but most of all an evocation of life in what is technically Early Modern England.

The lovely thing about Early Modern is that much of it is recognisable in today’s world. Christopher Wren is planning St Paul’s Cathedral, Mrs Pepys is demanding new curtains and Pepys himself is setting out arrangements for the running of the Navy that will influence Admiralty procedures into the 20th century. People speak English, albeit with words we would not always understand, and London, though smaller than today, is already developing a geography we are familiar with. Whitehall may be White Hall and the site of a palace as well as many civil service offices and the Houses of Parliament, but it is still a centre of government and ‘South of the River’ still has the faintly unsavoury reputation it enjoyed until the gentrification of the late 20th century.

Much, though, has changed. We do not fear illness in the way that people naturally did in the days when surgery was performed without anaesthetic and antibiotics were unknown. Syphilis was common and sufferers were offered mercury treatment. I have never known the details of mercury treatment but, having read this book, I do. I rather wish I didn’t.

We see London through the eyes of Deb Willet, who has come up from Bromley – then a rural idyll – to be taken on as a lady’s maid by Elisabeth Pepys. “London,” her aunt informs her, “is quite different from Bromley or Bow” and Deb’s first sight of the place takes us directly into the noise and bustle of a city rebuilding after the horrendous fire.

Swift’s ability to pull us directly into Pepys’ London is, for me, the best thing about the book. This is not, though, a history book and a plot is called for. Here Swift has undertaken a tricky task because Deb (like most of the major characters in the story) was a real person who often featured in Pepys’ diary and Swift has set herself the task of telling a story that fits all the recorded facts. And what a story it is! Spies, murder, stolen secret plans and an explosion in the Royal Dockyards. And, of course, a romance.

I felt myself shifting between genres. Surely Lord Bruncker, President of the Royal Society, didn’t have a mistress who was a spy for the Dutch? Wikipedia assures me that he might well have, in which case I suppose she might have done the odd bit of assassination on the side. It brought me out of the quaint world of Deb’s London with a start, but it could have happened and it certainly kept me turning the pages.

Deb finds a young man. There is a whole science in Hollywood devoted to the business of arranging for heroine and beau to meet: Swift has Jem save Deb twice – once from attack by a dog and once when she is caught in the crush of a street riot. It’s smoothly done and the budding relationship is nicely, if predictably, handled. And then, suddenly, it’s not predictable at all as the two are separated by their attitudes to the Civil War. Jem supported the Parliamentarians, while Deb’s family were all Royalists. We get a glimpse of the way that the war had split society and how fragile the peace still was.

[SPOILERS in this paragraph. If you don’t want to know if we have a happy ending, skip ahead.] There’s another sub-plot where Deb is trying to find the mother who abandoned her as a child. It does make for some very busy plotting with a series of unlikely coincidences finally bringing Deb and Jem and her mother together, foiling the Dutch and providing a happy ending. (An end-note tells us that everybody died young, but then it was the 17th century and most people did.) The coincidences seem a bit pat to me, but Dickens got away with worse and no one seems to hold that against him.

For me, the busy plotting sometimes got in the way of enjoying the history. There are so many things going on that ‘What happened next?’ can get in the way of an appreciation of what we are experiencing now. But it’s stories that keep people reading and Swift spins an excellent tale. The characters, too are just fabulous and utterly believable. Pepys is particularly interesting, part avuncular employer, part satyr. In these days of #metoo, Swift walks a very fine line between suggesting that Pepys is basically a decent man and making it clear that his attitude to women, whilst perhaps more acceptable then than now, was amoral and deeply damaging to many of them (including his wife whose misery – well-recoded in the diaries – is sympathetically drawn).

If the magic, for me, was sometimes lost as we jumped from a description of a shopping trip to a quick aside into espionage with a rushed meeting with her young man (disapproved of by Elisabeth, of course) and then back to an account of supper in the Pepys household, at least there was magic to lose.

Overall, this was a wonderful book and one which, thanks in part to the constant twists and turns of the plot, is likely to draw in even people who have no previous interest in the period.