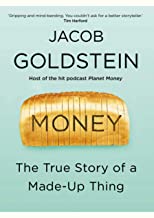 I live with somebody who understands a lot about money. I don’t mean that she’s great with the household budget (although we seem to keep afloat somehow) but that she understands some of the arcane areas of financial policy that make me very pleased that it’s her job and not mine. She’s always reading books on the financial system, or the pensions industry, and she knows how credit cards work. (You may think you know how credit cards work, but I promise you, you don’t.)

Anyway, I thought it might be nice if I could read something intelligent about money and kid her that I am entitled to view on whether or not Britain is running an unacceptable deficit, just as much as she is. So when Atlantic Books offered me a copy of Jacob Goldstein’s Money via NetGalley, I leapt at the chance to improve my financial literacy.

Goldstein hosts a podcast, Planet Money, and writes about money for New York Times Magazine. He understands his subject and is an excellent communicator. He talks through the history of money from the idea of proto-money – things that had value because of, for example, their use in religious ceremonies – through the use of precious metals as stores of value and into paper money. Paper money is probably what most people today would identify as “real money” but Goldstein goes on to point out that most value now is stored not as paper currency but as digital information on the ledgers of financial institutions.

As the money that we used to settle our debts, pay our mortgages, and trade with, became increasingly detached from any material store of wealth we moved more towards modern financial systems with all the strengths and weaknesses that they have. The strengths include the ability to create money by lending out more than you actually have. While you can’t lend people more gold than you have in your vaults, it’s easy to write promissory notes for more gold than there is in your vaults provided that not everybody cashes them in at once (as in a run on the bank). The extra money that is created in this way and the liquidity that it provides within the economy allows for substantial economic growth. Goldstein argues that times when money is being created correlate well with periods of economic growth while times when money is taken out of the system (for example by increasing interest rates or increasing taxation) correlate with periods of depression. He argues that the principal cause of the Great Depression was the Fed’s policy of raising interest rates in an attempt to maintain a link between the paper money that they issued and their gold reserves.

Whilst the creation of money not backed by any tangible assets allows dramatic economic growth and a genuine increase in wealth, it also allows substantial opportunities for fraud or crashes caused by that foolishness that we call “bubbles”. A good example of both would be bitcoin. It’s worth noting here that, whilst I still can’t claim to properly understand it, the description of the theory behind bitcoin given in this book is the clearest I have ever seen.

After talking us through the theory of the gold standard and the arcane mysteries of shadow banking, as well as more technical terminology (all terribly clearly explained) that I’m not going to fit into a review, Goldstein gets political. The theory behind the euro is examined and found wanting while the ideas underpinning modern monetary theory (MMT) get a much more positive assessment.

The penultimate paragraph of the book mentions covid (full marks for topicality). As we re-examine so many of the fundamentals of the modern world, perhaps MMT and the possibility of governments simply printing all the money that they need and never worrying about paying it back, is not as mad as it may once have seemed

This is a fascinating book full of random digressions that do not make you lose sight of the main argument. I particularly enjoyed the discussion of increasing wealth in terms of the amount of light that you can buy for a day’s work. It includes what is undoubtedly the most impressive illustrative graph I have seen anywhere and the book is probably worth buying for that alone. Even without that graph, though, it is an astonishingly entertaining and informative gallop through the theory of money and how it can be applied in the real world. If you don’t already know all this stuff and want to be able to understand something of what is going on around you (let alone share your opinions on social media) I strongly recommend that you get hold of a copy.