Apsley House: a statement in stone 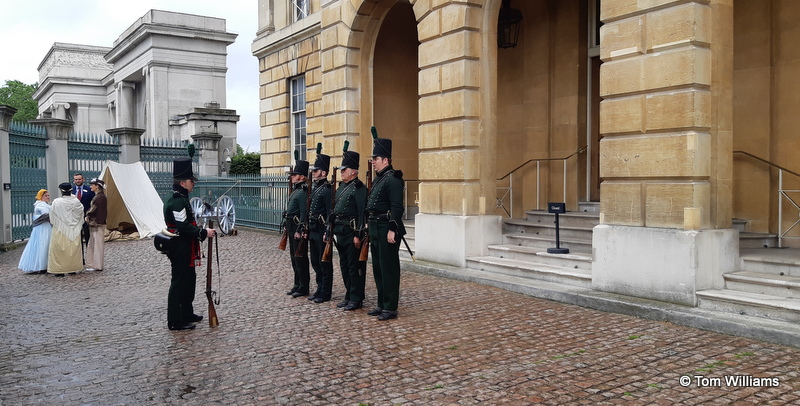 The Duke of Wellington bought Apsley house in 1816. It had been designed by Robert Adam for the first Baron Apsley in the 1770s. It was the first house on the north side of Piccadilly and, situated opposite the London turnpike, it was known as No. 1 London. It was a grand house, well suited for the victor of Waterloo, a national hero who remained head of the Army and who was soon to take up a career in politics. Apsley House as it was when Wellington bought it

It was not, though, to be quite grand enough. Apsley House was to be extended and furnished as a symbol of Wellington’s life and achievements. Apsley house as it is today might look as if it has been furnished as a museum, rather than as a private house, but the effect is pretty much what Wellington was looking for in his lifetime.

Almost as soon as he had bought the house, Wellington started to expand it. The first change he made was to add a grand dining room on the east of the house (the right as you look at the house from the front). This was set back from the main frontage and, even today, with some of the smaller buildings in the area now demolished, it doesn’t really impact on the appearance of the front of the house.

The dining room enabled him to hold grand dinners, most famously his annual Waterloo Banquet. The dining room was big enough for him to host 35 of his most senior officers. This, though, was considered inadequate and in 1828 work started on another extension, this time on the west side of the house.

The original Apsley house had five bays, whereas you can see in the photo below that now there are seven.

The two westernmost windows on the first floor (those on the left of the house) are the end windows of the Waterloo Gallery. This 90 foot long room was built to enable Wellington to host state dinners. It was not used for less splendid occasions when Wellington’s guests still ate in the original dining room, so it was only really for the annual Waterloo Banquet. Although the number of surviving officers inevitably reduced with every year, the number of people attending the Waterloo Banquet increased. The tables in the Waterloo Gallery would seat 85 guests and it seems likely that it was often full. Guests included King William IV who dined at Apsley House in 1836. The dinner was commemorated in a painting by William Salter, which gives some idea of the splendour of the occasion. (The banquet was a private occasion, but members of the public could pay to see the room laid out before the guests arrived.) The length of the Waterloo Gallery is clear in this picture, taken from Hyde Park.

The seven large windows on the first floor are the windows of the Waterloo Gallery. On the inside are mirrors and the windows would be closed at night with the mirrors reflecting the light from the candelabra in the gallery, making it appear both larger and brighter. During the day, the mirrors can be slid out of sight, leaving the large windows, five of which open onto a balcony.

The tables in the Waterloo Gallery can be cleared away when it is not in use for dining, but the two large floor-standing torcheres (one of which is visible on the left of the painting) are too heavy to move and are a permanent fixture. They were a gift from the Czar of Russia and the table used for banquets was designed to fit around them.

Wellington always intended his home to be a memorial to his victory over Napoleon. The building always housed a museum room (although it was not originally where the museum lives on the ground floor nowadays).

Wellington never met the Emperor but he collected an astonishing amount of art depicting Napoleon from his youth to the end of his rule. Most spectacularly, at the foot of the grand staircase is a gigantic (3.45 metre) statue of Napoleon depicted (with no trace of irony) as Mars the Peacemaker. Carved by Antonio Canova, it was commissioned by Napoleon in 1802 but the Emperor never liked it and banished it into storage, ordering that access be limited only to a handful of artists. After Waterloo it was purchased by the British government who gave it to Wellington, who had the floor at the foot of staircase specially reinforced to bear its weight.

The Striped Drawing Room, adjacent to the Waterloo Gallery, would have been a room where guests would gather before moving through to dine or could withdraw after the meal to chat and mingle. To allow it to accommodate a considerable number of people, Wellington had three rooms of the original house knocked into one. It was decorated with paintings of participants in the Battle of Waterloo and a panorama showing the battlefield.

The first floor of the house, where all the grand reception and dining rooms are, has no domestic rooms at all. The Duke and his family lived on the floor above (where the present duke still has his home). The house was purchased with money voted by Parliament for a “Waterloo Palace” for the victorious Duke, and Wellington understood the importance of a building that would serve as a memorial to the battle that established Britain’s place in Europe and (Wellington’s place in Britain). Even the doorman was an ex-soldier who had served in the battle.

Apsley House is a beautiful building in its own right and houses some important paintings (the Duke was an avid collector), but it is above all a statement in stone and brick as to the importance of Waterloo.

Apsley House is right next to Hyde Park Corner tube station and is open throughout the year. It’s generally closed on Mondays, but opening times vary and open days are limited to weekends during the winter. For details visit the website at https://www.english-heritage.org.uk/visit/places/apsley-house/prices-and-opening-times/. Entry is £10.50, although concessionary prices are available, and it is free to English Heritage members.

Thanks to English Heritage, whose audio guide to Apsley House is excellent (and whose staff there are patient and terrifyingly well-informed). The EH website on Apsley House (https://www.english-heritage.org.uk/visit/places/apsley-house/) is well worth a look.

The picture at the top of the page shows troops of the 95th Rifles parading at Apsley House on the anniversary of the Battle of Waterloo.

The picture of Apsley House as it was in 1816 is from a painting on the Prussian Service plate which is part of the Wellington Collection, in the care of English Heritage.

Salter’s painting of the Waterloo Banquet is in the public domain. (https://commons.wikimedia.org/wiki/File:WaterlooBanquetWilliamSalter.JPG)

For more beautiful photos of the interiors at Apsley House, I recommend https://www.pooky.com/inspiration/we-love-interiors/amazing-interiors-apsley-house-london

The University of Southampton’s webpage on the Waterloo Banquet (https://www.futurelearn.com/courses/wellington-and-waterloo/0/steps/24871) contains a mass of interesting detail.