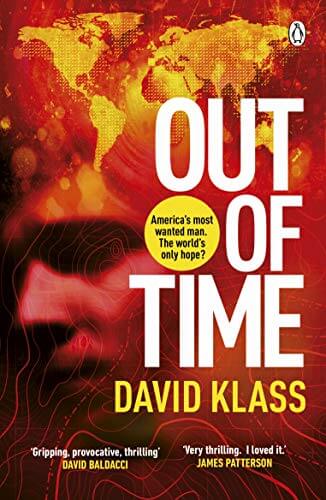 David Klass has a background in Young Adult (YA) fiction. As far as I’m concerned, this is good thing. YA fiction grabs your attention. Plots are usually fast moving. Characterisation is far from two-dimensional, but the reader is usually spared angst-ridden internal monologues. There is often a subplot involving a contemporary social issue, but the protagonists are pretty much left alone to get the job done – whether it’s rescuing the Princess from the tower (or, because YA novels tend to political correctness, rescuing the Prince from the tower) or stopping the terrorists with the atomic bomb.

Klass has brought all these skills to Out of Time and the result is a fast, furious, and, for me, satisfying read. Although it should definitely appeal to adults, I did often feel that I was reading a YA book. Our hero, Tom Smith, is an FBI agent with father issues (YA novels often feature young protagonists with father issues) who has joined the FBI as a computer analyst but, as seems the way with these things, rapidly graduates to a field agent hunting down bad guys with gun and badge.

The bad guy is an eco-terrorist who has been blowing up environmentally damaging projects (with a bit of political assassination on the side). But is he really a bad guy? After all, he may kill the innocent men, women and children who are in the wrong place when one of his bombs goes off, but he’s doing it for a good cause, right?

It’s a superficially appealing argument, but it is wrong. In fairness Klass understands this and has one of his characters put the case against political killing very directly.

“Every terrorist thinks his cause justifies his actions. No one has the right to take the law into his own hands, and especially to spill innocent blood. Anyone who does that must be stopped.” He paused and then asked softly, “But, Lise, what if in this single very unique case, Green Man happens to be 100% right?”
There was a deep seriousness in her face when she answered. “I served two years mandatory military service in Israel. I’ve been to bomb sites, from attacks on opposite sides of the same issue. I’ve used tweezers to pick up blown apart little pieces of women and children. Nothing justifies fanatical extremism. Nothing. Never.”

This is a problem for the book because part of the dramatic tension is that we are ambivalent about the Green Man getting caught. Part of us wants him to get away with murder and return safely to his loving wife and two adorable children. We feel this even more strongly as occasionally the book works in details about the environmental disasters that we are unleashing on the world. Some of this is genuinely informative. For example, I had never realised that the process of fracking releases methane on a large scale and this is simply discharged into the atmosphere where it is a particularly potent greenhouse gas. If you started out knowing nothing about the environmental movement, you will end up much better informed – but would you really want to read a book which celebrates an eco-terrorist if you are not already pretty committed to his cause?

If you want a work of fiction that seeks to educate on environmental issues, you would be better off going to something like Michael Crichton’s State of Fear, which also deals with eco-terrorism. The arguments there are widely regarded now as wrong (Crichton was sceptical about global warming, for example) but he does provide footnotes and references and if you are proselytising quite as much as Klass is, then footnotes, or at least a long appendix, might be a good idea.

In the end, though, it’s unfair to judge this book as a substantial work dealing with either ethics or environmentalism. It’s fast moving, and largely convincing, with an environmentalist background and a bit of ethical discussion thrown in. I loved it and powered through it very quickly. (Klass has an easy writing style.) But I do really enjoy YA novels. Judged as a YA book, this is a definite winner and many adults will appreciate it as an exciting read. As an adult discussion of serious issues, though, it’s not really careful or considered enough.