An alternative to reading James Burke 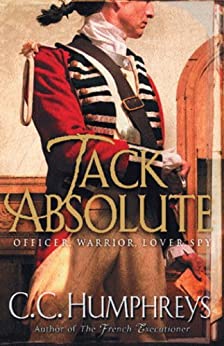 It will be a few months (probably) before the next James Burke book. Given that you’ve read all five (yes, really!) out already, you might be looking for an alternative. A series about another dashing military spy whose activities start in the late 18th century, Somebody like C C Humphreys’ Jack Absolute.

It was a really strange feeling for me, reading Jack Absolute. Absolute could be Burke’s older brother. Both are tall, slim, useful with sword and pistol, and have an eye for the ladies. Both are deeply cynical about the wars they have to fight but, in the end, are driven by patriotism to do their duty even when their duty stops them from pursuing their own pecuniary interests as much as they would like.

Burke, of course, is based on a real person whereas Absolute is based on another fictional character – the Jack Absolute of Sheridan’s The Rivals. Burke has William Brown to save him when he has got himself into a pit from which a single bound is not quite enough to free him. Absolute has Até, a Mohican Indian with a penchant for Hamlet.

Like Burke, Absolute is first and foremost a spy but he does find himself putting on a uniform and getting dragged into meticulously researched battles. While Burke is fighting the French in (mostly) Europe, Absolute’s battles are happening about 30 years earlier. He is fighting American rebels (backed by the French, of course, though they don’t actually feature in this book) during the War of Independence. There’s a lot of detail of the battle at Saratoga and Absolute spends a lot of time with General Burgoyne, so we learn plenty about the strategy of the campaign as well as the conduct of individual engagements.

Burgoyne isn’t the only historical figure to feature. Sheridan is there as well as soldiers like Benedict Arnold and the Mohawk leader Joseph Brant. There is a mass of less well-known people too, but you never get the impression that characters are being pushed into the book just so that Humphreys can show off. In fact, he wears what seems to me his considerable historical knowledge very lightly.

There is a satisfyingly evil villain (German, just to ring the changes) and a beautiful romantic interest. Humphreys writes well and I found the story bowled along fast enough for me to overlook some of the implausible coincidences. Até is kept busy arriving in the nick of time as our hero blunders into yet another disaster. I did find myself raising a critical eyebrow, but William Brown explained that that sort of thing happens in the best of novels and it is certainly a well-established trope for this genre.

There are various surprise revelations that shouldn’t come as much of a surprise if you have been paying attention, but this does have the advantage of allowing the reader to feel rather smug. And I suppose it’s reassuring to know that even a man with a brain so sharp he can look at a line of code and read it straight into English with minimal effort can fail to spot the secret agent under his nose. And, as Lee Child has observed, every hero should have one – and only one – flaw. Given Absolute’s martial skill, courage, strength, charm, and cunning, an inability to play Agatha Christie and work out whodunnit is only fair.

I found myself reading long into the night. It’s a little before my period and I know practically nothing about the American War of Independence, so it may be riddled with errors, but if it is I certainly never noticed. I was happily immersed in the 1770s and the life of a hero even more unlikely than James Burke. If you enjoy Burke, I’m confident you will enjoy Absolute. And, if you’re reading this because you have enjoyed Absolute but have never read Burke, might I suggest you will probably like him if you give the books a go?