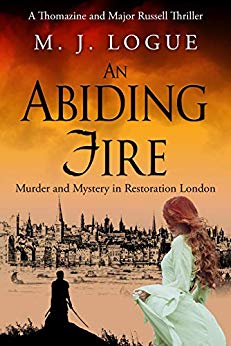 I seem to be getting more and more in to the 17th century. I really never meant to. It started with my visit to Edgehill and dinner with the Sealed Knot and then I found myself caught up in Jemahl Evans’ historical novel (as much history as novel in places), The Last Roundhead. After that I was plunged into the world of Mr Pepys, as summoned up in fantastic (and again historically grounded) detail by Deborah Swift in Pleasing Mr Pepys. I enjoyed that so much that I moved on to Deborah Swift’s story that took me to a dirtier, more dangerous and far less pleasant side of the same world in The Gilded Lily.

Perhaps Sapere Books have noticed, or perhaps I was just lucky, but they recently sent me a copy of M J Logue’s An Abiding Fire, set in Restoration London with a tiny walk-on part for Mr Pepys.

“Madam, if you consider that smellsock to be a decent anything you have yet to have any acquaintance with his wife. She has a number of stories to tell and none of them reflect very well on her husband.”

Poor Pepys, still routinely abused after more than three centuries, but that’s what you get for recording all your indiscretions in your diary.

Can you already tell that I liked this book? For I surely did. It’s a lovely, rollicking read with beautifully believable characters – many of them all more believable because they really existed and, as far as I can tell, Ms Logue has done her homework on the detail of their lives.

The story centres around the adventures of Major Russell, once one of Cromwell’s Roundheads, but now firmly on the side of the King. He has just married his childhood sweetheart, young, beautiful, and generally seen as somewhat out of his league. I’ve reviewed romances before and acquired a reputation as a nasty, cynical man who just can’t lose himself in a tale of true love. But here, I’m happy to turn into the fluffiest of romance-loving bunnies. We see the development of the relationship in the first months of a new marriage with chapters from the point of view of Major Russell alternating with scenes viewed through the eyes of Thomazine. There are rows, misunderstandings, reconciliations and all the passionate intensity of a relationship that is still setting out its own ground rules. It’s an absolute joy and would justify time spent reading all on its own.

This book, though, is not primarily a romance. (I suspect this is part of the reason that the romance element is so incredibly well done.) Britain is on the verge of war with the Dutch and Major Russell is one of King Charles’s spies. Soon he is caught up in a plot that seems designed to blame him for a sudden wave of murders and arson in London town. Who is behind these attacks, which seem designed to benefit the Dutch? Who is starting the rumours that claim Russell is a murderer and a traitor? (This is definitely the weakest point of the book. [POSSIBLE SPOILER if you really aren’t very good at whodunnits.] Who knows Russell well enough to be able to make such credible lies and who has a reputation throughout London, apparently, as a notorious gossip? Answer these two, not particularly difficult, questions and you will have identified the villain before poor Major Russell and wife have even got started.)

Never mind that Russell and his wife clearly aren’t the greatest detectives of their age. They’re brave and they’re fun and they love each other and they have beautiful friends with beautiful clothes who may be reprehensible but are wittily reprehensible, which seems to have been what mostly mattered in Charles II’s court.

There’s a climax with Thomazine suitably imperilled and Russell appropriately brave and the whole thing is set in the ropery at Chatham, which was a bonus as far as I’m concerned because I’ve been to the ropery at Chatham and it’s a remarkable building and I found the scene Logue describes came vividly to life for me. The ropery at Chatham

Of the book I’ve read recently in this period, Ms Logue’s is probably the least worthy and the most fun. But it is a solid piece of historical writing (the Historical Note is practically a text book in itself) and I’m all in favour of fun. If you read it quickly you’ll have finished almost in time for the sequel, A Deceitful Subtlety, published just about now.