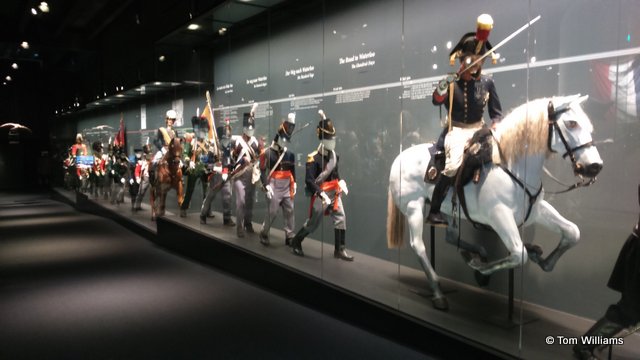 It’s been an unusual week, so this is going to be an unusual blog post.

Last Sunday was our Ruby Wedding anniversary and Tammy and I celebrated with a big party. In keeping with the historical theme of my blog, I’ll concentrate on the fact that we had a little ceremony in the Octagon Room – all that now remains of Orleans House. Built in 1710, Orleans House was later named for the Duc d’Orleans who lived in exile there. The Octagon Room was built around 1721 for entertaining visiting royalty (as you do). It was restored last year and is now rather splendid. Of course, this being us, we had to slip in a quick tango vals. (The bandoneon player is the very talented Alfredo Martin Espindola of Tango Terra.) Monday would have seemed like a good day to tidy up after the party, but instead we drove to Brussels. Tammy was speaking at a legal conference there and I wanted to take the opportunity to visit the battlefield at Waterloo. Although I have written about Waterloo, I have never actually been there before.

The place is, quite properly, seen as a memorial to the dead. It’s an important historical site too, of course. From the Lion’s Mound (built to mark the spot where the young Prince William of Orange was wounded by a French musket ball) you can see just how small. We are situated just ahead of the British lines and the white building is the farm of Haie-Sainte, which was the scene of some of the bitterest fighting. The picture below shows the Lion’s Mound photographed from just in front of ‘La Belle Alliance’ where Blucher and Wellington met after the French had been driven from the field. Almost all the fighting took place between here and just beyond the Mound where the French cavalry rode into the British lines. (There was fighting at Plancenoit, too, as the Prussians marched to relieve Wellington but the whole point is that they were trying to get to the main battle, where their presence would ultimately prove decisive.) So many men fought and died in such a tiny area and so much of it remains today. Haie-Sante is still a working farm and tourists are discouraged. Hougoumont was a working farm until recently and much of it still stands. The British casualty station at Mont Saint Jean is still there too, as is the farm where Napoleon spent the night before the battle. I found it vastly moving.

I still have party stuff to clear away and thank-you letters to write, so this will be a short post. There will be photos posted over the next few days and then some longer discussions of the events of 18 June 1815. I found walking the field quite humbling and I look forward to sharing my experience with you soon.