The Battle of the Nile 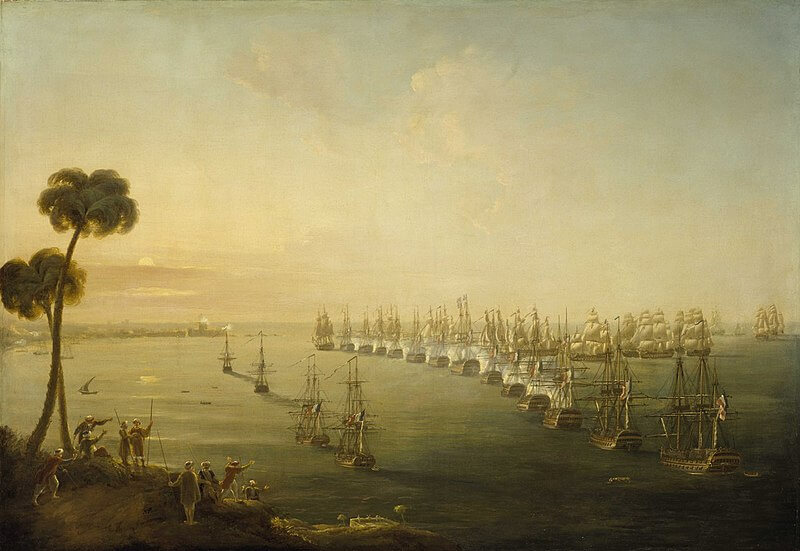 Last week was the anniversary of the Battle of the Nile back in 1798. Nowadays we associate Nelson so firmly with Trafalgar that his other victories can be overlooked. Back in the early 19th century, though, the Nile featured prominently on memorials like this one at Greenwich.

As with many battles, the name isn’t geographically accurate. The battle of the Nile didn’t actually take place at the Nile but at Abū Qīr Bay near Alexandria. Napoleon had invaded Egypt, his troops travelling in an enormous French fleet. After the troops had been successfully landed, his warships remained on the Egyptian coast ready to protect his lines of supply. They moored near the shore in the shelter of the bay.

Conventionally, naval battles were fought broadside to broadside, one ship against another. The French fleet was immensely strong. L’Orient, the French flagship mounted 118 guns. The French anchorage meant that the ships’ broadsides were facing out to sea, allowing an enormous concentration of fire to be brought to bear on any force attacking from the Mediterranean.

The tactic was overwhelmingly successful. Of the 13 French ships of the line, nine were captured and two destroyed. No British ships were lost.

The most dramatic moment of the battle was the loss of L’Orient which caught fire and exploded when the flames spread to the powder magazine. The Captain’s young son had been ordered by his father to stand at his position until his father told him to move. His father having died, the son is said to have remained on deck and died. His death is commemorated in the poem, Casabianca:

The boy stood on the burning deck
Whence all but he had fled.

After the battle, the British had complete naval dominance in the Mediterranean. With his lines of supply cut off, Napoleon’s plans to use Egypt as a jumping off point for further invasions were in disarray. Napoleon fled back to France the following year and the French army lingered on in Egypt until surrendering to the British in 1801.

The Battle of the Nile is the climax of Burke and the Bedouin. William Brown is on board, the Orion, one of the British ships, and witnesses L’Orient’s sinking.

An officer appeared. “All hands on deck!”

Confused, William joined the procession of seamen clambering onto the deck. The night was still warm, but after the atmosphere of the gun deck, it was bliss to breathe fresh air.

Out here, the view was dominated by the blaze from the Orient. Sales and rigging were well alight and the spars were dropping onto the deck. Flames could be seen running along the joints between her timbers, where they had been sealed with tar. Here and there, the fire had spread to the timbers themselves. Against the light, the crew could be seen desperately throwing water onto the fire, but many had clearly already given up hope and were shimmying down ropes to escape into the sea.

Buckets of water appeared, passed hand-to-hand up ship from the bilges or hauled to the deck from the sea below. While most of the men from the gun deck poured the water over the timbers at their feet, the crew who had been manning the sales aloft hauled buckets from the deck and soaked the canvas and ropes.

William could not understand the reason for this frantic activity, but it became all too clear after they had been at work for only a few minutes.

William had his back to the Orient when it happened. The night was lit up with a brilliant flash of light and, while his brain was still trying to comprehend what he had seen, the noise of the explosion rolled across the ship. William felt himself pushed forward by the force of the blast.

William fell to the deck, along with the rest of the crew.

Debris from the wreck flew across the ship. Pieces of hot metal scoured tracks in Saumarez’s immaculate deck. Pieces of the Orient‘s hull – two yards long and three feet thick – were hurled at the Orion as if they weighed no more than pieces of paper. There was other debris too – things William did not want to look at too closely. Most of the bodies were in pieces too small to be recognised as human, but William saw what was clearly an arm, the fist still clenched, although whatever it had been holding was lost somewhere in the Mediterranean.

Like all the Burke books, Burke and the Bedouin is first and foremost a spy story. But I wanted to describe one of Nelson’s greatest victories for a generation that has no longer grown up with the tale. There are French spies and a beautiful woman and midnight gallops across the desert, but the story ends with the historical reality of the Battle of the Nile and the end of Napoleon’s dreams of conquest in the east.

The picture at the top of the page is ‘The Battle of the Nile, 1 August 1798‘ by Nicholas Pocock.