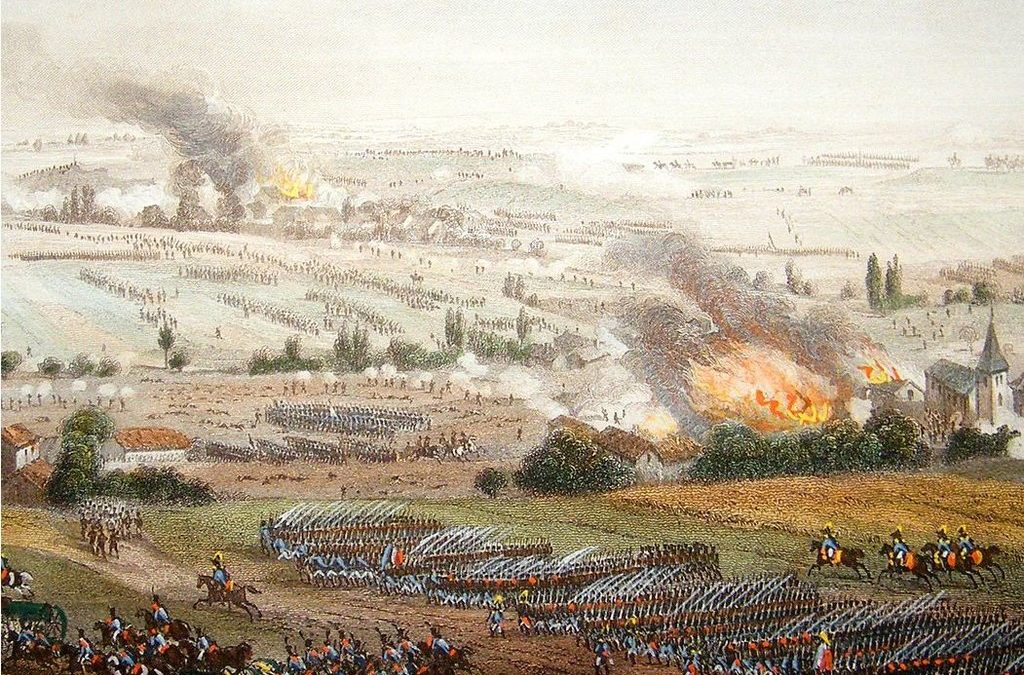 Today is the anniversary of the Battle of Ligny, one of the often forgotten battles that made up the Waterloo campaign. 27,000 people died in that battle, so here is an extra blog post to remember just why they were fighting.

Back in 1815 there was no such country as Germany. Instead, there were a number of German states, some quite large and others just tiny principalities. Amongst all these states, the dominant one was Prussia. Prussia had been around since 1525 and it was not only large but, because of its militaristic approach to international relations, it was powerful too.

During the Napoleonic Wars the conflict between Prussia and France had been particularly vicious. When Napoleon escaped from Elba, some Prussians saw this as providing an opportunity to take the revenge that they felt they had been robbed of when the French surrendered in 1814 before Prussian troops could sack Paris.

The Prussian army was to work with Wellington’s troops to protect Belgium from attack. Naturally enough, the British line was toward the west of the country, because they had arrived by sea in Ostend, while the Prussian line was more to the East with their supply train heading back towards Prussia. This is shown very crudely in the picture below. This doesn’t show the substantial reserves that the British held around Brussels, but it does show how Napoleon’s strike at Charleroi achieved his first goal of splitting the Prussian and British forces. As they withdrew, the Prussians pulled back on their supply lines, moving north eastward, leaving the road north unguarded.

The Prussian troops were commanded by Field Marshal Gebhard Leberecht von Blücher. Blücher was 72 years old but in robust health and a general who (as was common in those days) believed in leading from the front. Blücher was a professional soldier, who would probably have been happy to fight anybody, but he was particularly enthusiastic about fighting the French, his hatred of that nation being almost pathological.
As Blücher pulled back, Napoleon divided his forces. He personally led 38,000 men in pursuit of the Prussians while sending his Marshal Ney to take what he believed to be the undefended (or virtually undefended) road north to Brussels with 45 to 50,000 men.

Napoleon had, however, seriously underestimated the strength of the Prussian army. Blücher commanded his forces personally and concentrated 70,000 men on the battlefield, substantially outnumbering Napoleon.

The Prussians made their stand near the village of Ligny. Although Napoleon was outnumbered, neither side was able to gain a decisive advantage. Casualties on both sides were enormous, with neither the French nor the Prussians inclined to take prisoners. 16,000 Prussians and 11,000 French died on the field.

After they had been fighting all day, Napoleon sent a column of his elite Young Guard to smash into the Prussian centre. Faced by these fresh troops after a day taking horrendous punishment, the Prussians broke and fled northward.

During the fighting Blücher’s horse had been killed and had fallen on the Field Marshal. Blücher was trapped for some time while the battle ebbed and flowed across him. His aide-de-camp, Count Nostitz, threw a greatcoat over his commander, to hide his rank and the French never knew that they had the opportunity to take or kill him.

Blücher’s injuries were quite severe and he was not really in any condition to ride, but he insisted on resuming command. Bandaging his damaged ribs and self-medicating liberally with schnapps he was soon back in the saddle.

What happened next was to prove decisive. Blücher had agreed with Wellington that they would join forces and make a stand together. Many of Blücher’s senior officers considered that the idea of trying to swing the army round toward the West to rendezvous with the British was madness. Surely, faced with the whole of Napoleon’s army heading toward Brussels, the British would withdraw. If they did, then if the Prussians headed west they could find themselves exposed to Napoleon’s forces who had just defeated them once and would surely defeat them again. And even if Wellington did make a stand, what was to say that he would fare any better than they had at Ligny? Far more sensible, surely, to take the wise course of withdrawing along their lines of communication, heading east back towards Prussia.

Blücher would have none of it. He had given his word to Wellington and it is reasonable to think that he was also determined to have another crack at Napoleon’s army. The army was to swing westward towards Waterloo.

Some authors have suggested that the orders for the line of march were deliberately confused by senior officers who hoped that the delays caused would mean that the Prussians would arrive on the field after Napoleon had won and they could then withdraw without a fight. If this was the plan, it didn’t work. The Prussian army made good time towards Waterloo. What happened when they got there is a story for later.

There is a paperback edition, also available through Amazon at https://www.amazon.co.uk/Burke-Waterloo-Assassination-Majestys-Confidential/dp/1983268313.

The image shows the Battle of Ligny by Theodore Jung.