The escape from Elba 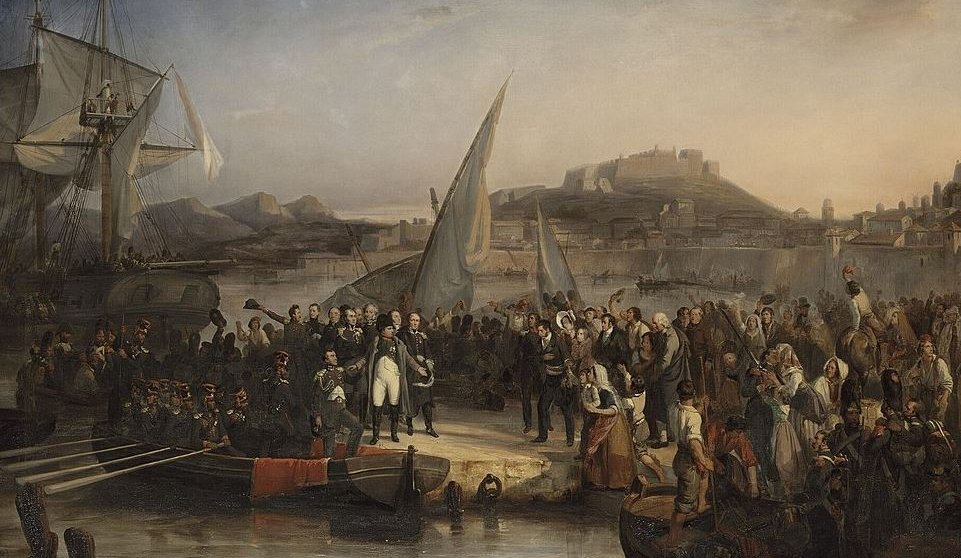 Burke at Waterloo was published this weekend. At the start of the book Napoleon is safely in exile on Elba, Louis XVIII has been installed on the throne in Paris and the victorious Allies are planning the future of 19th-century Europe. Then, suddenly, Napoleon is back. Louis has fled and French armies are marching on Brussels.

How did it happen? How did Napoleon escape from Elba?

In my last post about Napoleon on Elba we saw that he was becoming increasingly dissatisfied with life there. He could probably have coped with the boredom – he had always been fascinated by detail and immersed himself in the various projects he had set up on the island – but he was not prepared to tolerate the French reneging on their promise to pay him a pension or the attempts to keep him from his son. He knew that he still had supporters in the army and in Paris and he decided it was time to leave Elba and join them.

Although the British kept a representative, Sir Neil Campbell, on the island to keep a discreet eye on Napoleon’s activities, the Emperor was quietly able to buy military supplies. He had these put aboard the ships of his little navy (generally used to bring supplies to the island or to move him to the adjacent islands of the archipelago of which Elba is a part). The horses of his Polish Lancers were prepared for immediate movement and the saddlers were kept busy ensuring that all their harness was in good order. The troops were inspected and new NCOs were appointed.

It’s remarkable that, given all these clear military preparations, the secret of Napoleon’s planned escape seems to have been well kept. The only person who knew for sure was Princess Pauline, who wormed the secret out of General Bertrand, one of the two men Napoleon had entrusted with his plans. She had her silver shipped to Livorno in Italy for safe-keeping a few days before the escape, but even then no one seems to have appreciated the significance of this.

Neil Campbell was so blissfully unaware that there might be anything amiss that on 16 February he left Elba to visit the Italian mainland. Such visits were a frequent occurrence, ostensibly to liaise with officers in Italy, but in fact to visit his mistress, Countess Miniacci, in Florence. (There are even suggestions that she was a Napoleonic agent.)

Campbell’s own account of his unfortunate decision to leave the island appears in his published journal:

On February 16, I quitted Elba in HMS “Partridge”… upon a short excursion to the Continent for my health… I was anxious also to consult some medical man at Florence on account of the increasing deafness, supposed to arise from my wounds with which I have been lately affected.

Campbell’s position was made worse when his captain let fall to the French that the Partridge was to return to the mainland to pick him up ten days later. Napoleon thus knew he had ten clear days to make his preparations and escape before Campbell or the Partridge were in a position to stop him.

With Campbell away, Napoleon was able to order that no ships were to sail from Elba, so that, even if there were suspicions about his plans on the island, there was no way to get news to possible enemies.

As part of the pretence that all was normal, on 25th of February Napoleon and his officers all attended a ball given by Princess Pauline, but the next day at about one o’clock in the afternoon the gates of the town were closed and Napoleon’s army received its orders for departure. Even at this stage nobody was told where they were going. If the British had had an inkling of Napoleon’s plans to escape, they would almost certainly have assumed that he was heading for Italy. There were even suggestions that Elba had been chosen for his exile in part because it suited the Russians to have the Austrians permanently needing to keep up their guard up against potential Napoleonic interference with their Italian possessions. By mid-afternoon, Napoleon’s fleet was ready to sail. At eight o’clock Napoleon himself boarded his brig, the Inconstant. Extra cannon had been mounted aboard and her hull had been painted in the colours usually used by British ships, to improve her chances of escaping any blockade. She was accompanied by the Stella, the other ship of Napoleon’s navy, the Caroline, a French merchant brig, the St Esprit, which had been chartered for the occasion and three other small vessels. He probably had around a thousand men with him.

When the fleet left Elba, it was carried by a good southerly wind, but the next day the wind dropped. It must have been a nerve wracking time for Napoleon. The Mediterranean was patrolled by French and English fleets and every British ship had a portrait of Napoleon in the captain’s cabin, so that he could be easily identified if intercepted on the high seas. The calm did affect the enemy as well as him, though. Because of the lack of wind Campbell did not arrive back on Elba until the 28th, so the alarm was not raised until two days after Napoleon’s escape.

The winds picked up again on the 27th, but the Inconstant was hailed by a French naval ship, the Zephyr. Its master, realising that the Inconstant had sailed from Elba, asked how Napoleon was. “Marvellously well,” came the reply – supposedly dictated by the Emperor himself. With no reason for suspicion, the Zephyr allowed Napoleon’s vessel to pass.

Napoleon landed in France near Antibes on March 1, 1815. He had, as the Bonapartists had always believed, returned as the violets bloomed in the spring. The events that led to Waterloo were under way.

For a detailed account of Napoleon’s time on Elba and his escape, see The Island Empire by the anonymous ‘author of Blondelle’, published by T Bosworth in 1855 and available in Google Books.