Napoleon on the psychiatrist’s couch 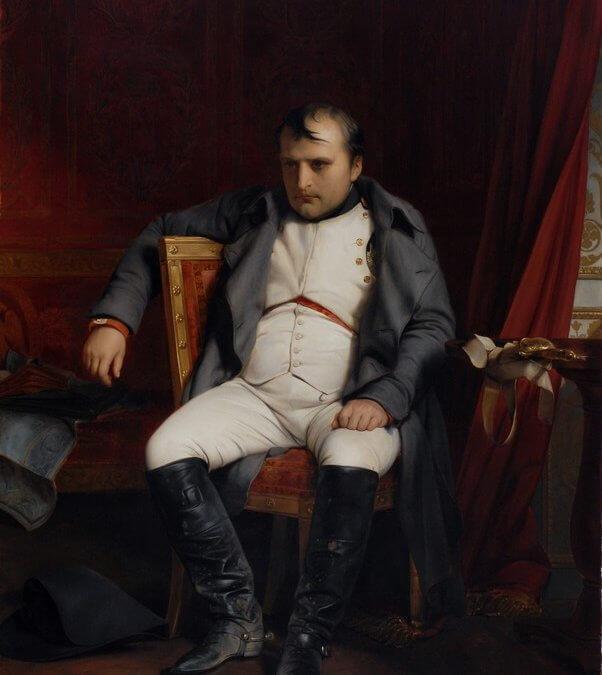 Like last week, this week’s blog is a result of my attendance at the recent conference on ‘War and Peace in the Age of Napoleon’ held at King’s College London. It’s basically a summary of the final presentation. That seems worth doing because it was a fun way to end two days of heavy historical analysis with a fascinating attempt to get inside the head of Napoleon by having his behaviour examined by a team of psychiatrists whose day job is treating American servicemen. It was presented by Dr Edward J Coss, who is a professor of military history at the U.S. Army Command and General Staff College.

Napoleon being dead, Dr Coss decided that any diagnosis of his mental state should be based on the closest he could get to actual observation of the living subject, so he looked for things that Napoleon had written himself or statements made by witnesses who directly quoted the man. In this way he gathered a substantial corpus of what could be treated as primary source material on his subject. He then gave this mass of quotations to practising psychiatrists engaged in the treatment of American servicemen.

Coss was expecting to find symptoms of PTSD. Napoleon had been almost constantly engaged in warfare for 17 years. He was a general who (contrary to the way the English tend to think of him) often led from the front and was exposed to danger directly and saw the effects of warfare on his men for all that time. Coss stated that it’s rare for anybody engaged in conflict over a period of years not to suffer from PTSD, so this seemed the most obvious thing to look for.

To his surprise, none of the psychiatrists considered that there was any evidence of PTSD, but, in their professional view, Napoleon did show signs of other attitudes and behaviours which are nowadays classified as psychological illness.

The psychiatrists said they saw clear evidence of narcissism. This is a condition characterised by

There were interesting illustrations of such behaviours cited. For example, at Jaffa Napoleon touched the bubos of soldiers suffering from plague. While some people see this as evidence of his trying to show sympathy with the dying men, the psychiatrists suggested that it was more likely (as Napoleon was not a notably sympathetic character) that he touched them to show that he could not die of plague like ordinary people – he was, indeed, special.

I must admit that I was not entirely convinced. Napoleon was the single most powerful man in the world, ruler (effectively dictator) of a huge empire. A sense of self-importance and, indeed, entitlement seems, in the circumstances, quite reasonable. As to the fantasies of power, it is difficult to see how any fantasy could exceed the reality of his position. On the other hand, his early behaviour in Corsica (where he was heavily involved in local politics and rather over-reached himself as a very young man) did suggest that he had a sense of self-importance even then.

It does seem that Napoleon was big on admiration. He did like a certain amount of bowing and scraping, and Kamil Szadkowski’s paper on his court (officially established in 1804) gave a lot of fascinating detail on just how incredibly expensive and elaborate it was. But the court was part of a political strategy designed to establish his rule in France as being as legitimate as that of other rulers. Lacking the “divine right” of hereditary rulers, it was essential that the panoply of state was at least as impressive as that of other countries. It’s likely that Napoleon enjoyed the admiration (who wouldn’t?) but it’s not necessarily a symptom of a psychological pathology. I was also sceptical at the suggestion that Napoleon lacked empathy. It is said that he never showed real sympathy for those who were injured under his command. It is, of course, impossible to know for sure but the suggestion that he lacked the ability to form wholehearted emotional relationships is dubious. Even if you discount his relationship with Josephine (which was, at best, erratic) as a young man he did fall desperately (and rather pathetically) in love on more than one occasion. The suggestion that he was always cold and distant does not fit with many of the details of his life.

Much as, contrarian that I am, I was happy to take issue with individual pointers toward narcissism, eventually I was worn down by the sheer quantity of evidence. In any case, the psychiatric diagnosis relies on positive indicators of only five of these characteristics, and the psychiatrists had no trouble in agreeing that he was, indeed, a narcissist. Interestingly, according to Coss, narcissists are considered by psychiatrists to be “inwardly fragile”. Certainly Napoleon was prone to attacks of fury when crossed, often alternating with periods of sulking. He also famously attempted suicide on two occasions. It seems quite possible that under the bluster, the arrogance, and the spectacular displays of power, there was a sad little boy who had never had a good relationship with his father and who really, really needed his mum. Napoleon was plagued with depression on Elba

But that was not all. We all know that Napoleon was moody and the psychiatrists volunteered the suggestion that he was clinically depressed – or perhaps bipolar. There was also a suspicion that by the end of his rule he may have been suffering a degree of brain damage. He twice injured his head falling from horses, on one occasion having a brief loss of consciousness. Nowadays he would have been encouraged to take it easy for a while, but in those days the suggestion that you “get back on the horse” was interpreted pretty literally. It is possible that some of his behaviour was the result of concussion-induced brain damage.

For me, the least surprising finding was the suggestion that Napoleon was a sociopath. Given that sociopathy is often linked with high performance in a corporate culture (so the incidence of sociopathy in CEOs is often quoted as being about 20%), I would be quite surprised if Napoleon had not had a sociopathic personality.

If the French army had had psychiatrists back in the day, could Napoleon have been treated? Well, brain scans could have looked for evidence of neurological damage, although as nobody did anything about it the time it’s unlikely that any effective treatment could have been given years later. The depression might have responded to drug treatment, but narcissism and sociopathy, according to the psychiatrists involved in the study, are almost impossible to treat.

It was a hugely entertaining presentation and may well give us a better understanding of Napoleon’s mind, but does it help us understand his rule? Honestly, I suspect not – except in so far that it reminds us that underneath that famous bicorn hat was a real person who had his personal strengths and weaknesses, his ups and his downs. By the time of Waterloo, he was quite sick. (He may well have picked up an illness during his Egyptian campaign that was never to entirely leave him. He is widely believed to have been suffering from piles at Waterloo and, whether or not the psychiatric diagnosis is accurate, he certainly seems to have had emotional issues by the end of his rule.) He was, it is fair to say, not at his best. When people ask why, for example, he allowed the cavalry to charge without close infantry support, we should consider the possibility that he was just having a really bad day.

Napoleon abdicated in Fontainebleau, 4 April 1814 by Paul Delaroche (1845)
Napoleon at Jaffa is a detail from Bonaparte visitant les pestiférés de Jaffa by Antoine-Jean Gros (1804)
Napoleon I on his Imperial Throne by Jean-Auguste-Dominique Ingres (1806)
Napoleon on Elba is an anonymous painting from the early 19th century