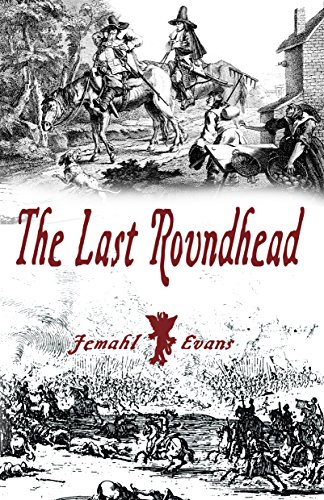 Last year I found myself at a celebration of the battle of Edgehill. We walked the battlefield (or some of it – it’s huge) and were lectured by a historian on strategy and then we had dinner with guests from the Sealed Knot who demonstrated pike drill and musketry. I was there because my host was working on the assumption that if I’m interested in 19th-century military history, I must really want to know about the Civil War. I really didn’t want to know about the Civil War. It was long and messy and complicated, but I found myself getting sucked in. This year I went to visit Syon House and, by pure happenstance, found myself on the receiving end of a lecture on the house’s role in the Civil War. Yes, by now the Civil War has me in its clutches. So when Jemahl Evans was offering free copies of The Last Roundhead, I not only downloaded it, but actually started to read it. (You’ll have to pay 99p for it on Kindle. Just buy it.)

It’s a great book. I’m going to cavil over some of the detail, so let’s make that clear from the beginning. It’s a fabulous read and terrifyingly well researched.

Everybody knows about the Civil War, don’t they? Those dashing Cavaliers and miserable Roundheads; the heroic cavalry charges; the feathered hats and the armies marching across a bucolic 17th century English countryside?

If you cherished any such illusions, Evans will be quick to burst your bubble. He tells the story from the point of view of the last surviving Roundhead, 95 years old, bitter and angry and, for his sins, living next to Alexander Pope, whose continual building and gardening drives him to distraction. I sympathise. I live near Mr Pope’s old home and, almost 400 years later, the wretched poet’s garden plans are still disrupting the neighbourhood. (Pope is said to have advised Henrietta Howard on her gardens and English Heritage’s attempts to recreate the result is annoying the locals, as I’ve blogged about here.)

Blandford Candy(‘Sugar’ to everyone who knows him, which irritates him no end) joins the Parliamentary cause because he’s running away from home on account of a misunderstanding involving his brother’s wife. Sugar, it turns out, is prone to misunderstandings involving women.

Even before he reaches London, he is introduced to the realities of the war to come. He meets John Hurry, a bully and a thug, who is ostensibly on the Parliamentary side, but whose main interest in the war is the opportunities it gives for rapine and pillage.

Hurry is the first of many historical characters we are to meet. I’d never heard of him, but I know he’s a real person because there is an endnote to tell me so. It’s the first of 88 end-notes.

Evans has a Masters degree in history and he writes historical fiction where the history is sometimes in danger of overwhelming the fiction. Eighty-eight end-notes is a lot. Many of them are biographical notes and that’s a lot of characters to keep track of in a novel. We are not, admittedly, in Hilary Mantel territory – but then I’m not a fan of Mantel.

Fortunately, Evans is better at keeping his characters in some sort of narrative structure than is Mantel and it’s not that often that I found myself skipping backwards and forwards trying to work out who was betraying whom and why. Sugar ends up a spy, so there is an awful lot of betraying going on – some of it political, but quite a lot because he can’t, to coin a phrase, keep it in his breeches. The result is a satisfying amount of plotting and killing and general excitement in between the ghastliness of battles where men die ugly pointless deaths and don’t look glamourous and dashing at all. Thanks to those celebrations I attended, I am sure that his account of Edgehill is solid and his discussion of how a Parliamentarian pinnace was fired on from Syon House fits with what I was told there. It’s also a measure of Evans scholarship, because it’s not an incident that is particularly well-known. Syon House as it was in the 17th century. (Painting by Robert Griffier)

Don’t allow yourself to become too attached to any of the characters, because they die in droves – as often from sickness as from battle. Until well into the 19th century sickness was far more of a threat to the average soldier than was the enemy, but most modern writers miss this. Evans’ graphic description of one of Sugar’s friends dying of typhus reminds us of the reality of 17th century warfare.

The amount of historical detail and the accuracy with which it is related means that I felt that I was reading a history book as much as a novel. It could easily have become tedious. It certainly disobeys one of the first maxims of historical novelists: that you should wear your learning lightly. But in the end, the sheer vitality of the first person narration carries you along. Evans is just a very good writer and he’s telling a very good story. As somebody who is wary of self-improvement, I found myself occasionally irritated by the sense that I was being educated quite so obviously. But the fact is that I was learning more and more about the Civil War and learning it quite painlessly.

If you have any interest in this period, The Last Roundhead is a brilliant way to learn more. If you’re not, you might find it occasionally a bit heavy going, but if you really have no interest at all in the Civil War, why on earth are you reading it? For somebody who is not a Civil War specialist but just wants a rollicking good yarn set in the period, I can recommend this wholeheartedly.

As I said at the beginning, I can cavil with some details, but this remains great fun as well as a fantastic introduction to the history of the period. It’s the first time for many years that I have got so caught up in a book that I have missed my stop and I have powered through it because, even when I was getting confused by the plot, I always wanted to know what happened next.

We are going to learn more about Sugar Candy’s adventures. I recommend that you all go out and buy them.