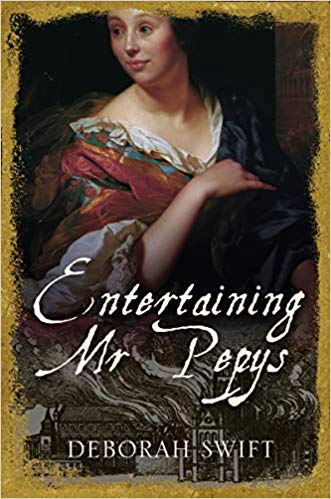 Entertaining Mr Pepys is the third and, probably final, book in Deborah Swift’s series about Mr Pepys’ women. Although the protagonist, Mrs  Knepp is an actual historical character who Pepys knew, the man himself is only incidental to the story. In fact, all the scenes featuring him could be removed without affecting the story arc at all.

In the second in the series, A Plague on Mr Pepys, Swift had moved away from the privileged world of the Pepys household in order to explore the poverty and misery of the artisanal class. This time the focus is on the world of the theatre, but again we see the way in which the mid-17th century trapped and exploited women. Mrs Knepp has been cast adrift by her uncaring father into an unloving marriage. Mr Knepp is a brute, using his wife as an unpaid servant. All that keeps her going is that she has one servant of her own who, being black, is even lower down the pecking order than she is.

Other women have more incidental roles, exchanging sexual favours for better parts in the theatre or driven mad by cruel husbands (in a scene of full-on Dickens-esque madness, she stands in the street as London burns, “her arms waving like a crazy statue”). Even Mrs Pepys complains of the cruelty and meanness of her husband though, by the standards of the time, Pepys seems to have been quite a good husband and her life was comfortable, verging on luxurious. If the first three quarters of the book reads, at times, like a feminist tract, does it give a fair picture of the position of women in the world of the period? I’m not sure that it does. We meet an orange girl whose mother was a prostitute and who is, at 14 years old, already little better than a whore herself. Bright and sassy, she still seems doomed to a miserable, and probably short, life, but this is Nell Gwynne, who is to become the King’s mistress. We hear lots about the present hardships of the characters but little about their future success.

We get a rather one-sided version of their married lives, too. We are assured that, though Mrs Knepp spends a lot of time with Pepys, they are not lovers. This is the Pepys who, we know from his diaries, will literally bend a serving girl over in a corridor and have his way with barely a break of step as he passes. But Mrs Knepp is unsullied by Pepys (though an excellent Historical Note suggests at least two lovers). Poor Mr Knepp: brute as he is, he is at least a faithful brute.

The problem that I have is not so much that the women have miserable lives but that Swift clearly believes that they are miserable mainly on account of their being women. You don’t have to be a committed Marxist to interpret the exploitation of women as an example of the general exploitation of the weak by the strong. Mrs Pepys, as we have seen in earlier books in the series, is not above casual cruelty to servants and the book does not dwell on the hardships faced by the labouring man of the period. In fact, Knepp’s business (he hires carriage horses) requires a yard full of lads who, one suspects do hard work fetching and carrying for rather more kicks than ha’pence. Even so, Mrs Knepp is quite happy to see them go without food when she spends the meat money on theatre tickets, demonstrating that the rule that the strong will exploit the weak applies across both genders.

Sadly (and uncharacteristically), Swift allows the requirements of the plot elements to over-ride the characterisation at the beginning of the story. Mrs Knepp has apparently had a very happy childhood with a father whom she loves and who seems to have loved her back. With her mother’s death, her father marries a wicked step-mother and the poor girl is foisted off on a clearly unsuitable husband after which her father cuts off all contact. It doesn’t ring true and sticks out as an obvious plot device in a book in which most of the other relationships are lovingly and credibly delineated. Even the ghastly Mr Knepp is given a back-story that makes him a sympathetic character despite his frequent cruelty.

Even with these reservations, the book demonstrates Swift’s fine grasp of her period. It’s full of convincing detail: the use of limes to avoid pregnancy; the actor-manager’s insistence on women playing roles where they are disguised as men because “Killigrew likes you in breeches so they can see your bum”; the casual prejudice against Catholics. She takes you into that world and makes it real. You hear the noises and smell the smells (and how revolting many of those smells are). If the miserable domestic life of Mrs Knepp sometimes acts as a bit of a drag on the plot we, like her, can at least escape to the theatre and the world of the King’s Players is as lively as the world of Knepp’s stable yard is dull.

The book, like the theatrical performances that are such an important part of the story, is divided into three acts. Act Three sees a dramatic change of pace. Domestic drama and sexual politics give way to the horror that is the Great Fire of London. Here Swift comes into her own. She has a flair for melodrama and, with the fire, melodrama is clearly appropriate. Swift first describes the fire as we see it in Pepys’ diary.

Elisabeth peered over Janey’s shoulder. There was an orange glow a little way off on Marke Lane.

“Fancy you waking us up for that,” Elisabeth said. ”It’s just someone’s bonfire. Someone could piss it out.”

By the morning more than three hundred houses have been burned down and the Thames is clogged with the boats of refugees fleeing the flames. We see the disaster from the point of view of several of the characters: Pepys burying his parmesan cheese in his garden; a Frenchman returning up the River from a trip across the Channel; Knepp with a stable full of straw and horses terrified by the smell of burning. We move from the detail of horses trapped in their stalls and people staring in dismay at the wreckage of their houses pulled down to make firebreaks, to a broader view of the impact of the fire on the city. The landscape of London was like mouth with missing teeth, full of blackened stumps and gaps. The view was alien; unrecognisable. Half-burned joists and rafters stuck out from church steeples, in the distance something exploded.

By the time the fire is burned out, relationships have been changed for ever. “It’s a purification,” one character says. “London needed it.” There is talk of how the city cannot survive, though we know, of course, that it did. Out of the fire, came a better London and, in this book, better people. Even Knepp is redeemed and, at last, Swift allows that some men do try to be decent people, even prepared to sacrifice themselves for the women they love. (No more details because spoilers!)

In the end, the fire redeems not only the characters but the book. Any criticisms that the reader has in the earlier chapters are likely to be burned away in the flames. If some of the reconciliations seem a little pat, well, it worked for Dickens, so I don’t see why Swift shouldn’t be allowed to get away with it too. She has, once again, produced a gripping and convincing tale of the Restoration. If you enjoy this period (and books like M J Logue’s An Abiding Fire) you should definitely read this one.

[This is an extended version of a review that first appeared in Historia, the on-line magazine of the Historical Writers’ Association: http://www.historiamag.com/ ]