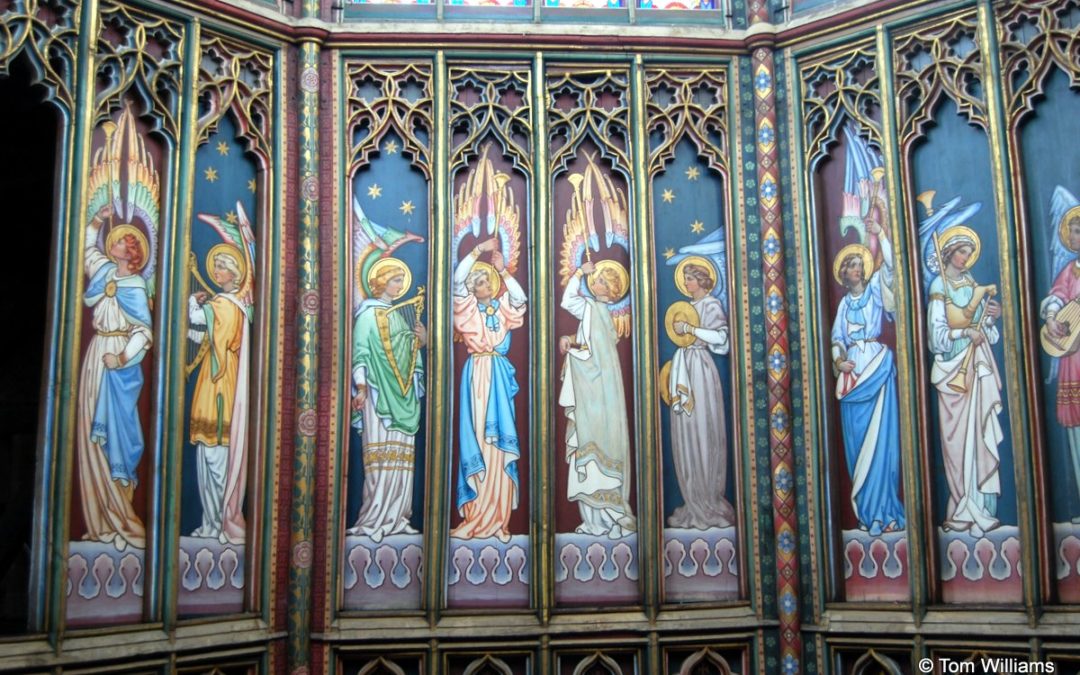 The Pre-Raphaelite angels we looked at last week (and which are shown again in the heading to this page) may not be to everybody’s taste, but these other angels, high on the ceiling, are a restoration of the original imagery, keeping close to what was there before. The nave ceiling is another piece of Victorian restoration which I think works very well. It’s a major piece of work because the cathedral is 537ft (161m) long and claims to have the longest nave in the country. I don’t know if that is really true, but it’s certainly very long. Here’s the view from the West door. The Victorians were also responsible for painting some of the walls in a way I found very convincing. There are some of the original wall paintings still visible, like this 14th century artwork from St Edmund’s Chapel. The great West tower (215ft or 66m high) was completed in the 12th century, but in 1392 someone had the brilliant idea of adding an octagonal tower onto the top to house a belfry. Have we mentioned clay soil? The north-west transept collapsed shortly after, leaving the asymmetrical front we see today, though extensive buttressing has kept the tower itself standing. Ironically the belfry is not used. It was probably the monks’ mania for continually expanding the cathedral that led to the collapse of the central spire. In the 14th century they decided to build a Lady Chapel just north of the main cathedral building. You can see it in this photo taken from the roof. The Lady Chapel is on the left and, as you can see, dangerously close to the main building. The result was that the digging of the foundations led to changes in the water table which was probably the reason for the collapse of the central tower. This foolishness has, however, left us not only with the stunning octagonal tower and lantern, but with the largest Lady Chapel in England. Originally it would have had stained-glass windows and a screen across the centre dividing the area used by the monks from that used by the laity. The Reformation, though, put an end to that with the smashing of the stained-glass windows and the destruction of the screen. The chapel only survived at all by being rededicated as a separate church. The result, though, is that now it has been taken back as part of the cathedral it is an astonishingly light and airy space and very beautiful. Stupidly, I didn’t take a photograph of it, so this one is courtesy of David Iliff. It wasn’t just the Lady Chapel but suffered during the Reformation. Throughout the cathedral stained-glass was destroyed and the statues of the saints which used to fill niches all around the building were either removed or defaced. It was then that the splendid shrine of St Ethelreda vanished forever, leaving just a pile of stones that may or may not once have been part of it.

Lots of churches came in for similar treatment during the Civil War, but people in Ely are quick to deny that any of the damage to the cathedral was done then. Oliver Cromwell was a local lad and seems to have been unwilling to damage the place. The local vicar was told that he must stop choral services (the Puritans disapproved of music in church) and when he refused to do so he and his congregation were driven out of the church. There seems to be some uncertainty as to what happened next, though some stories suggest that the place (as with many other churches) was used for stabling Parliamentary cavalry. In any case, there was no permanent harm and with the Restoration the Dean and Chapter were re-appointed and started a programme of refurbishment. Since then the cathedral has undergone several cycles of repair and restoration, which continue up to the latest work to repair roofing on the octagonal tower which is still ongoing. With substantial elements from the 12th, 13th, and 14th centuries, Ely Cathedral is an astonishing example of medieval architecture at its finest and a remarkably beautiful building. If you are ever anywhere nearby, I do recommend you go and see it.

All other photographs author’s own.

Sadly, although I seem to average over 3,000 visitors a month, I do not get 3,000 book sales. As I mentioned last week, I am considering putting on an app that allows you to donate if you like the site. Ironically, the app doesn’t take donations as low as 99p and you don’t even get a book out of it, but I suspect that some people might find the idea of a straightforward donation easier than buying a book they may never read. How do you feel about it? If you haven’t said anything yet, can you let me know. Please write in the ‘Comments’ below or use the Contact page on this site.