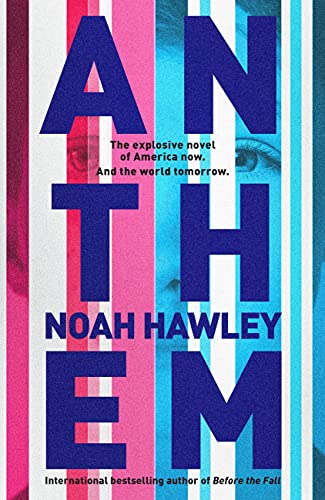 Anthem is, to put it mildly, rather a strange book. It is, perhaps, the book that 2022 deserves: quirky; darkly cynical; very funny in places but desperately sad in others; simultaneously deeply pessimistic but finally (perhaps unrealistically) optimistic.

The book is set in an America of the very near future with several incidental characters who are named real people and key figures who are given fictional names but who are clearly identifiable. It must have given the lawyers pause.

Hawley likes to take down the fourth wall from time to time and talk directly to his readers. Thus we know that he does not intend to take sides. There are two parties in the USA: the party of Truth and the Party of Lies and they are, he says, interchangeable.

Let’s not kid ourselves though. Hawley is a fully paid up member of the Liberal Elite and this book was never going to view Trump (referred to throughout as the god king) in a positive light. In fact, one of the funniest passages of the book is a random, rambling Trumpian monologue which catches his tone exactly and which, sadly, is too long to include here. It includes the line:

“But the omelet comes and the sausage – can I just tell you – the size of my pinkie, okay. Or smaller, ‘cause I got pretty big hands.”

It’s fair to say that this is not a book to appeal to mid-Western Republicans.

But, I hear you cry (because this demolishing the fourth wall is catching), what is the book ABOUT?

Good question, but arguably irrelevant. Is the Lord of the Rings about a couple of midgets trying to throw a ring into a volcano, or is it an epic metaphor about good and evil and the struggle for civilisation? Is Anthem a story about mass suicide amongst the youth of the world (although, frankly, this is so US-centric that “the world” is purely background colour) or is it an extended riff on the failure of modern politics, our refusal to deal properly with climate change and the general unpleasantness of human beings to each other? (That’s a rhetorical question, by the way.)

My personal politics hover somewhere between the Party of Truth and the Party of Lies, which means that I quite often read the Guardian but find that its painful insistence on being continually shocked by the basic unfairness of the world can irritate. Anthem is like reading the Guardian steadily for 427 pages. Fortunately, Hawley is a seriously good writer and his prose carries you along, even when you are losing patience with his remorselessly metrosexual, comfortable, all-American view of life and its woes. After all, the starting point of the book is that we are supposed to feel sympathetic and concerned about all the dear little children of privilege who are killing themselves because – well, we never discover exactly why. Teenage angst gone mad, mainly. It was difficult to care that much before the teenagers of Ukraine found themselves taking up weapons in a doomed attempt to save their homeland but, now that the news is full of young people with real troubles, I find myself struggling to tune up the world’s tiniest violin.

Hawley built his reputation in screen-writing and this is reflected in the style of his novel. While it does take itself seriously as a novel of ideas, it is happy too lurch off into action-packed sequences which show a Hollywood-inspired lack of attention to plot detail. People meet when the plot needs them to meet; escape deadly traps with implausible ease; and, when required, return from apparent death. When all the author’s attempts to get people to the right place at the right time fail, he resorts to having them guided directly by god, who speaks to them via a teen savant who calls himself the Prophet.

There is a figure called the Wizard (not a real wizard and bearing remarkable similarities to Jeffrey Epstein) and another called the Witch (probably a real witch). (You may notice that several characters seem unduly attracted to Capital Letters.)

The Witch appears, with no backstory and little attempt at narrative coherence and tortures a major character over an extended period. She is then apparently killed (more than once) but remorselessly continues, evil incarnate, to pursue our young hero until she doesn’t any more. She vanishes from the storyline as inexplicably as she arrived in it.

The messages from god, the improbable coincidences, characters like the Witch – all these are things that we have grown used to in a screenplay. The sort of thing where you wake after a fun night at the cinema (or on Netflix – this is 2022) and say, “But how did he know that she would be at the nightclub?” Only pedantic people allow this to spoil their pleasure in a good action movie, but one of the things that distinguishes books from film is that the plot of books should try to avoid this sort of thing while Anthem positively embraces it. I’m not going to give examples because even I am not quite that pedantic and, in any case, it would involve massive spoilers, but once you start looking you will see a lot of them.

So is this a terrible book? No, definitely not. It positively bowls along and the prose is a pleasure to read. And it does make some sharp and worthwhile points about the world we live in. But it is not the Great American Novel that some reviewers (and maybe even the author) think it is. It may well be the Great American Novel That Defines 2022, but that’s a bit like being the most cheerful Russian novel about the Gulag: there’s not that much competition and even the best of the field (take a bow The First Circle) is still pretty depressing.

Writing a review of Anthem and trying to say intelligent things about it, all the irritating quirks of the book become much more noticeable, but (though I was vaguely uneasy about some of it) while I was reading I was turning pages at speed and generally enjoying the experience. It’s a long book, but it was a relatively quick read. If you are not a mid-Western Republican and you can get through the Guardian without balling it up and throwing it at the wall, then you will probably find more to enjoy than to hate. Read it and form your own opinion.