Writing history before there was history. 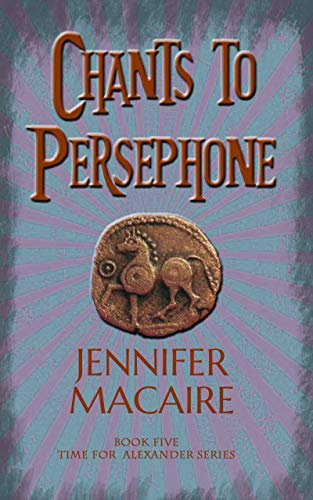 In “Chants to Persephone”, the latest book in her “Time for Alexander” series, Jennifer Macaire talks about the forerunners of the Vikings with horns on their helmets.

It’s an interesting bit of period detail because everybody knows, as we are told over and over again, that the idea that Vikings wore horns on their helmets is a myth. Except that I had a definite recollection of seeing a horned helmet at the Museum of London, so yesterday I went and took a photo. It turns out that this is not the original piece, but a copy. The original is in the British Museum and I reckon that the Museum of London knows how to make a decent copy. At least, it’s unlikely that they put the horns on by accident.

The helmet dates from between 150 and 50 BCE, so it’s a couple of hundred years after the one that Jennifer Macaire is describing, but it fits nicely the pre-Viking period she is writing about. This one is unlikely to have been worn by the ancestors of any Norwegians, given that it was found in the Thames at Waterloo Bridge, but it does show what the well-dressed warrior was wearing in this period. The label says that it was “unlikely to have been worn in battle”, but was probably a religious offering. I’ve read this about other horned helmets, but the only evidence for it seems to be that we all know that the Vikings didn’t wear horned helmets, so all the horned helmets we find must have been purely ceremonial. It’s a bit of a circular argument.

This does illustrate the difficulty in writing about this era. Jennifer Macaire’s books are full of detail. Some of the detail – even stuff like how the ancient Greeks made toothpaste – is carefully researched from written records, but “Chants to Persephone” takes her time travelling heroine to ancient Gaul and written records there are thin on the ground. The result is that a lot of the detail is more speculative than in the earlier volumes. For example, Ms Macaire tells us that

Breakfast in Gaul consisted of bacon, porridge with honey, scalded milk with chicory, eggs, and a delicious sausage made over of leftover wild boar fried with spices.

How does she know? Have we unearthed an Ancient Gaulish fast-food joint complete with breakfast menu?

In fact we can make reasonably educated guesses about what the Gauls ate, supplemented (I’d guess) by written records once the Romans arrived. Bacon, honey, porridge – all these seem reasonable things for the Gauls to eat, but did they eat them for breakfast? I have no idea – and I’m guessing that Macaire has no idea either. But they are reasonable assumptions based on what evidence we have and even if the details are wrong, I think that “Chants to Persephone” gives a fair idea of what life in Gaul must have been like.

This is the wonder of historical fiction: it allows us to explore the past, using our imagination to fill in those pesky gaps in the historical record and Macaire does it in her usual engaging style.

This book marks a turning point in the series, because up till now it has been rooted in what we know of the history of Alexander’s life. Anyone who’s been following the story so far (and if you haven’t, I’d recommend you read the first books rather than start with this one) will know that the time-travelling Ashley has saved Alexander from malaria, leaving a convenient corpse to take his place in history. Macaire has taken Ashley away from Babylon (where the real Alexander died) and she is now travelling through Gaul with her Macedonian hero. The plot, to be honest, is a bit sketchy and much of this episode in the continuing series is travelogue, spiced up with a fair bit of violence, Macaire’s trademark humour, and Ashley’s rampant sexual appetite. (We have a brief lesbian episode in this book, which Ashley at least has the good grace to feel embarrassed about — though why she should be embarrassed given her husband’s flagrant bisexuality is not entirely clear.) If you’ve enjoyed the books so far (and I have) you will enjoy this one – though maybe not as much as some of the earlier episodes. If you haven’t met Ashley and Alexander yet, I really recommend that you do, starting with “The Road to Alexander”.

And, just for good luck, here’s a shield to go with that splendid helmet. Chants to Persephone is available on Amazon: getbook.at/Persephone