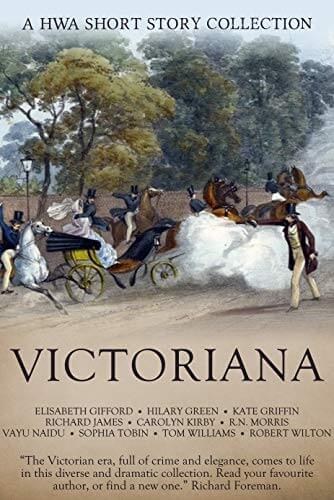 My choice for a book to review this week is a little strange because it’s a book I wrote. Well, not exactly – but I did write 10% of it.

Yes, it’s a book of short stories: Victoriana, produced by the Historical Writers’ Association together with Sharpe books. There are ten stories with the only common theme being that they are all set in the Victorian period. It was not only an honour to be asked to contribute alongside some rather better-known names – like Elisabeth Gifford and Hilary Green – but it gave me an opportunity to revisit James Brooke. When I finished The White Rajah, I knew there were so many more tales I could have told about James Brooke’s life in Borneo, but the sequel saw my narrator moving on to the Indian Mutiny (in Cawnpore) and there was no real chance to revisit Brooke. I’d always thought it would be fun to write some short stories about life in Borneo under Brooke rule and now I had the chance. I’m really happy with it, but I’m not going to review it here because That Would Be Wrong. You’ll have to read that one for yourself and make up your own mind.

As with every book of short stories there will be something that appeals to everybody and not everybody will like all of them. There were a couple that were definitely not my cup of tea, but I’m not going to single them out because I’m sure there will be somebody who will love them. Instead I’d just like to highlight some of my favourites.

Carolyn Kirby’s Ladies and Gentlemen is the best kind of historical fiction. It takes an actual event and the author uses her imagination to paint a picture that lets us understand the reality of a situation that, thank goodness, nobody in this country has to face nowadays. I’m being deliberately vague, because I don’t want to spoil the story. It’s not exactly a twist in the tail, but you will enjoy it more for not knowing what is coming next. It’s a stunning story and, given that Victoriana costs only £2.99 on Kindle, it justifies buying it all by itself.

Sophia Tobin’s The Unwanted Suitor is a disturbing tale with fantastical elements that leave you uncertain exactly what has happened but, despite this, it gives a wonderful insight into the way that marriage probably worked (or didn’t) for many “respectable” couples in the Victorian age.

Inevitably there are stories of Empire, reflecting not only how the British viewed the nations that they conquered but also something of how the colonial natives viewed the British. Elisabeth Gifford’s The Last Resort has an unusual take on the way that the British saw some of their colonial endeavours contrasted with how they looked to the natives. It takes a step away from the nowadays somewhat conventional view of exploiters and exploited and provides an interesting insight into the stories the British told themselves about the project of Empire.

A couple of the contributors, like me, have chosen to tell stories about characters who have previously appeared in books of theirs, but all the stories stand up well even if you have read nothing previously by the writers.

There are detective stories and romances. We visit Russia, Greenland, India, South Africa, and, of course, Borneo. It’s a lovely cross section of writers and writing about the Victorian era. Each story is accompanied with a brief interview where the writers talk about their background and inspiration. Some of them might well encourage you to look for more of their work.

Even without my 10% interest, I would be happy to recommend this book of short stories. At £2.99, really what have you got to lose?