The Forger and the Thief 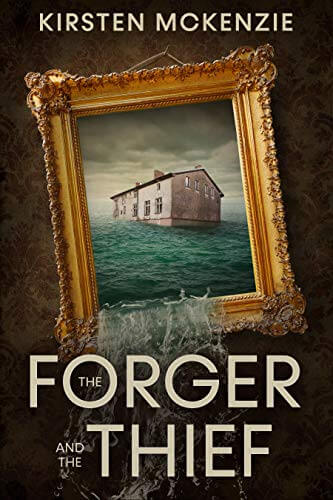 In keeping with my promise last week that I am going to cut back slightly on blogging, I’m going to stop doing all my book reviews as separate Tuesday blogs. So here, as my first Friday book review for a while is a look at Kirsten McKenzie’s latest. Like all of us, Kirsten has had to revise her plans for her book launch because of covid and the book is officially being launched in her native New Zealand in November. It is, though, already available on Amazon and you can buy it HERE.

Kirsten has moved away from her time-shift historical novels to immerse herself thoroughly in horror and The Forger and the Thief is a full-on Gothic novel with all the trademark tropes of the genre: horror, death, and romance, with a suitable side-order of religious references and morality.

The story is set in Florence in 1966. It revolves around five people, although there is a substantial supporting cast. Although they all have names, the chapters refer to them by the iconic types they represent: the Guest, the Wife, the Student, the Cleaner (more accurately the Thief) and the Policeman. All but the Student have guilty secrets in their past and even the Student, though not carrying any guilt, is living with the horror of having survived the Nazi death camps.

The characters are drawn with a fairly broad brush (though some who are painted very dark do redeem themselves at the end). That’s fine in a Gothic novel and it does mean that, although the story seems confusing at first with several parallel narratives that only slowly come to intertwine, there is none of that flipping backwards and forwards to remember who people are that can take you out of a story. You always know whether we are looking at the woman fleeing an abusive husband, or the concentration camp survivor, or the policewoman (a more significant character than the Policeman, I thought, but casual sexism was all the rage in 1966). There is a lot of fun as we begin to see the links between them.

The narrative takes place in November. The winter rains have turned the river Arno into a raging torrent, which bursts its banks and floods Florence. The River itself features as a character in the novel and the sense of its destructive power is one of the strongest things about the book.

As the river hits town, all the plans and intrigues of the characters are literally swept up in the cataclysm that will leave several of them dead. I’m certainly not going to spoil the suspense by telling you which ones.

This is not a deep and meaningful book but it does race along. Like all the best stories it leaves you wanting to know what happens next. I didn’t start with high expectations, but I was soon caught up in the narrative, putting aside some much worthier books as I rushed on to get to the end.

A fun read for a dark and stormy night.