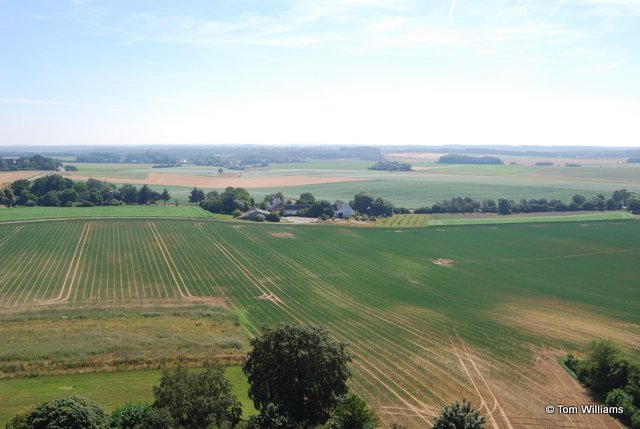 Time to return to Waterloo, I think.

We’ve looked at Hougoumont, but now it’s time to turn our attention to Wellington’s other forward outpost – the farm at La Haye-Sainte – that’s the building more or less in the centre of the photo, which was taken from the Lion’s Mound..

Unlike Hougoumont, the farm really was a forward outpost. About three hundred yards in front of Wellington’s centre, the farm, with its substantial farmyard held around 400 troops of the King’s German Legion (KGL), supported by British riflemen who took up position in a pit nearby.

There was surprisingly little action centred on the farmhouse in the first hours of battle with neither commander apparently properly appreciating its importance. As the day went on, though, the amount of fighting around La Haye-Sainte grew.

In Burke at Waterloo, Burke’s sergeant, William Brown, is fighting alongside the riflemen, and the account accords well with real accounts of the battle for the farm.

At last the drummers started to beat amongst the ranks of blue-uniformed warriors and the columns began to bear down on La Haye Sainte. They advanced at a quick step with loud cries of ‘Vive l’Empereur!’ From the heights behind William came a murderous artillery fire that struck down dozens of the advancing soldiers, but they came on regardless.

Now they had reached the beginning of the slope. As they approached La Haye Sainte, skirmishers broke out from the head of each of the columns. Finally, the 95th had something to shoot at. The sound of their rifles was almost lost in the din of artillery as French and British guns duelled across the battlefield.

The farm ahead of them was now the scene of desperate fighting. The French had the place surrounded on three sides, pouring fire into the farmyard. A French brigade moved towards the north of the farm to complete its encirclement. As they did so, they came within range of the sandpit and the Rifles opened up on them. William fired, reloaded and fired again. There was no careful wrapping of the balls now. He rammed home his ammunition as fast as he could. With the enemy so close, it was speed, not accuracy, that was needed. There were so many that it seemed almost impossible not to hit them. The French dropped by the score, but as fast as the men of the 95th killed them, more blue-coated figures moved to replace the dead. Outnumbered as they were, it could only be a matter of time before the Rifles were overrun.

Then, to William’s amazement, the brigade swung away, as if unwilling to face the men in the sandpit. If they were trying to escape the Green Jackets, though, this manoeuvre went horribly wrong, for their change in direction took them straight towards the company that were hidden in the hedge. Once again, their ranks were decimated by British rifle fire.

For a moment, William thought that their three companies of Rifles might achieve the impossible and beat back the French brigade, but, even as the French hesitated, an outburst of firing and cheers drew everyone’s attention to the east. There, through the chaos of smoke, he could see men in the dark blue of the Belgian infantry breaking back towards the main Allied lines while the lighter blue of the French pursued them.

Their captain saw it too, cursed, briefly but fluently, and then turned to his sergeant. ‘The Belgians have broken. We’re too exposed. We have to withdraw.’

William already had his rifle at his shoulder, so he pulled the trigger and took down one more Frenchman. Then, with the rest of the men of the 95th, he started heading back to their own lines.

It was shortly after the French attack described here that the British cavalry advanced in the famous ‘Charge of the Scots Greys’. That cavalry charge in reality achieved very little, but it did relieve pressure on La Haye-Sainte, which held out until around 6.00pm. The King’s German Legion were reinforced by English troops who had become separated from their comrades in the chaos of the battle. The KGL, though, used a different calibre of ball from other units of the British Army and, isolated ahead of the line and unable to use the ammunition of British troops who broke through to them, the KGL was finally forced to withdraw because of a shortage of ammunition.

The French now controlled a strong point from which they could mount a direct assault on the centre of the British line. Such an attack earlier in the day would have been decisive, but Napoleon had left it too late. Blucher’s troops were already on the field and the battle was lost.

Although the farm had been the site of violent conflict for hours, it seems to have survived remarkably intact. The building is now privately owned and still operates as a farm, discouraging visitors. It’s one of the few places on the Waterloo battlefield which does not seem to want to exploit its connection with the events of that day.

You’ve just seen an extract from Burke at Waterloo. The book does climax at the battle, but it’s far from a regular military history story, like Sharpe. Burke (a real person, though his adventures here are fictional) was a spy and spends most of the book trying to track down the man who organised an attempt on Wellington’s life while he was the British ambassador in Paris. (Yes, at least one such attempt took place but it was hushed up then and seems to have been hushed up ever since.) There are dastardly deeds, beautiful women, and, yes, there is the battle of Waterloo. What’s not to like?

Burke at Waterloo is available on Amazon as an e-book or now in paperback. North American readers can buy it through Simon & Schuster.