The Malvern Festival of Military History starts next Friday and I’m spending more and more of my time worrying about what I’m going to say when I’m on the panel talking about writing historical fiction on Sunday. (Not that I write much historical fiction on Sundays, but you know what I mean.) I’ve posted here recently about researching historical novels and about how you might use that research when you’re putting together your story. This has resulted in a brief conversation on Twitter with Jacqueline Reiter, a proper historian, who has written a book about the second Earl of Chatham, and who will also be at Malvern, talking about Waterloo. We agreed with each other that historical novels don’t generally benefit from lots of footnotes, but that Historical Notes (what she referred to as “the short essay on the historical background included in many histfic books”) are generally a Very Good Thing.

This seemed as good an excuse as any to re-post something I produced last year on the subject. Given that not nearly so many people read my blog back then, the odds are you won’t have seen it before.

Some notes on notes

I’m a huge fan of historical notes. A good historical note can provide an excellent jumping off point if you want to learn more about the period the book is set in. I used to love Walter Scott’s historical notes on the Waverley novels. These might run to several pages long and were a worthwhile read even if you hadn’t looked at the novel itself. Nowadays historical notes are rather shorter but they are still often an important part of the book. George MacDonald Fraser’s footnotes in the Flashman novels not only provide fascinating historical detail but are also an integral part of the humour.

Historical notes allow the author to explain where they have taken liberties with the facts. Many people resent historical errors that are not acknowledged and will say that a book is hardly historical at all if it has blatantly departed from the known facts. Acknowledging things you have changed in a historical note can go some way to warding off such criticism. Possibly more importantly, when a book deals with important historical issues the notes can provide confirmation that the events recounted did actually happen. I was shocked, for example, in Deborah Swift’s story, Past Encounters, to read about the treatment of British prisoners of war by Nazi Germany. I thought perhaps the horrors had been exaggerated and was reassured (in a horrible sort of way) by an endnote explaining that such events really happened and providing some references for those who wanted to follow them up. Lawrence Hill’s wonderful The Book of Negroes similarly provides notes to confirm that the terrible events of the book are real.

Many authors now provide bibliographies, either as part of a historical note or instead of one. The Book of Negroes supplements its historical note with several pages of suggestions for further reading, while Nicola Barker’s The Cauliflower has no historical detail in her endnote but an extensive list of books for those who want to know more about the character at the centre of her novel.

Obviously all my books come with historical notes.

Back Home is in some ways the least historical of my efforts. All the others are based around specific historical facts, while the events of Back Home are entirely fictional. It was only when I came to write the notes this that I really recognised how firmly embedded in the history of 1859 the book was. So here, as an example of how one historical novelist deals with end notes, are the final pages of that book. 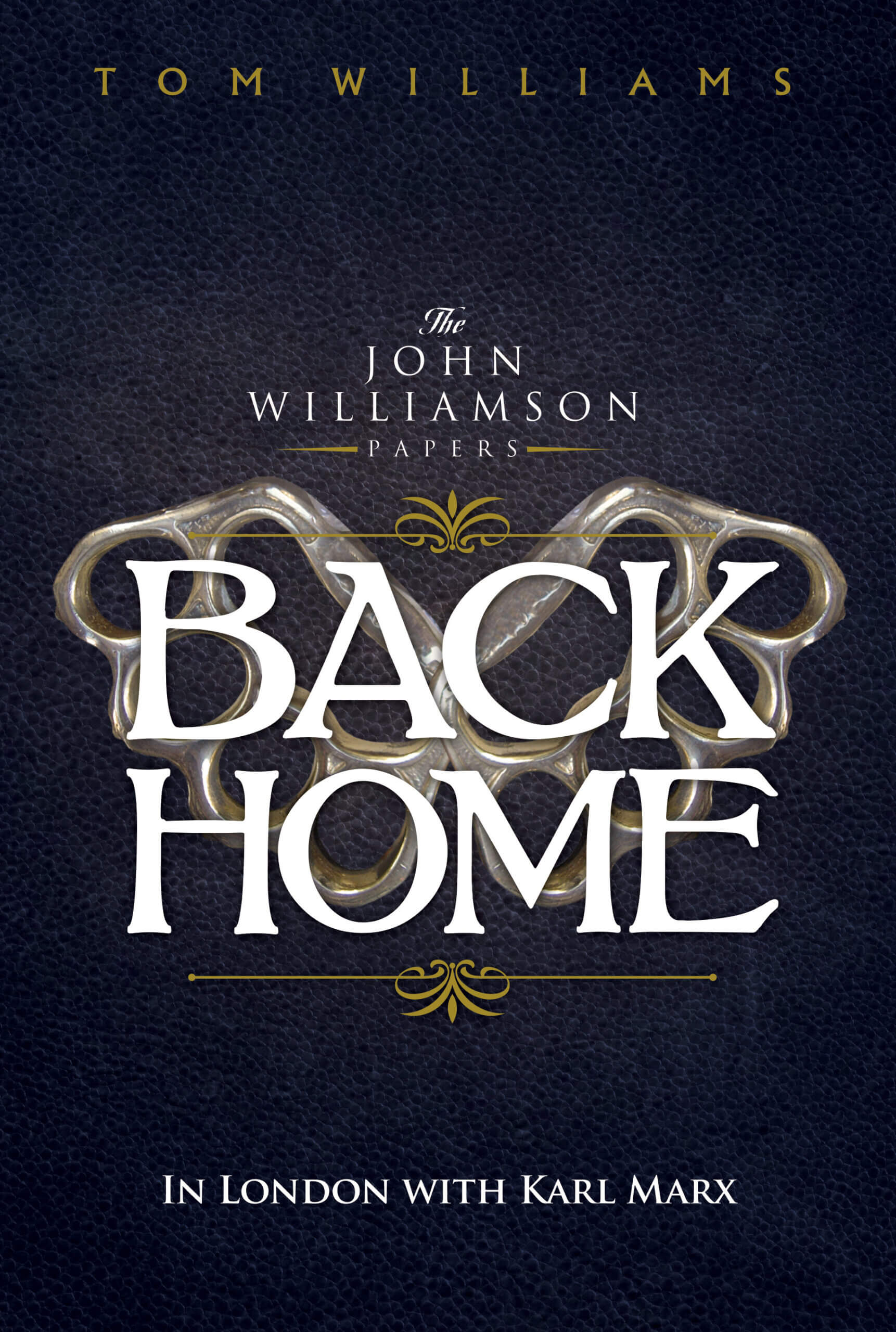 1859 was an interesting time in England. Victoria had already been on the throne for twenty-two years, but in many ways this was still the England of the early nineteenth century. In London the great slums, or rookeries, were slowly being demolished, but those that remained were a horrific reminder of an earlier age. We were only twenty years from the time of Sherlock Holmes, who bridges the Victorian and Edwardian eras, but policing and social order in 1859 was nothing like the situation in the 1880s.

London was growing massively from a city of under a million people in 1801 to almost two million in 1841. By 1861, the population (boosted by Irish immigrants fleeing the potato famine) was 2.8 million and the city was the largest in the Western world. John Williamson [my narrator] naturally compares the metropolis with Calcutta, a famously populous city, but in 1859 London actually had many times more inhabitants than Calcutta, which had a population of several hundred thousand in the 1850s. (For this, as for various other bits of useful historical trivia, I am grateful to my editor, Greg Rees, who seems to have an encyclopaedic knowledge of such detail.)

It was a time of enormous social and technological change, and John Williamson found himself caught between the old eighteenth-century world and the modern world that is emerging from its decay.

Most of the story takes place in London, centring on Seven Dials. I’m a frequent visitor to the Seven Dials Club, so it’s an area I know reasonably well. I think the first time I came across Seven Dials in literature was in Disraeli’s Sybil, in which the heroine is rescued from a mob there. It is depicted as a place of utter lawlessness. Reading about it in other works of fiction and non-fiction, different people seem to describe it very differently. To some, it is just a noisome slum, to others an unspeakably vile place. Williamson’s version veers towards the negative, but his Seven Dials is by no means the worst you can find in literature. Seven Dials in the mid-19th century

It’s odd looking at the town you live in, in a period not that long ago. My grandfather was a policeman in Soho, no distance from Seven Dials, less than fifty years after the time of this book. I have a picture of Victorian London made up from books written then (Dickens is brilliant for period feel), stories that have built up about the town, modern novels and, for all they’re full of errors, films set in the nineteenth century.

There are a lot of books that can help you understand Williamson’s London. The one I started with was The Victorian Underworld by Donald Thomas. It’s a brilliant overview, though (like many other books) it relies rather heavily on Henry Mayhew’s London Labour and the London Poor. Mayhew’s enormous work is more than most people will ever get right through, but it’s well worth dipping in and out of. I’ve read several accounts of coining, but Mayhew’s is the best. He confirms Williamson’s statements about the discounted rate for buying forged currency. He is also full of fascinating details, such as the areas most habituated by prostitutes. (Williamson’s first trip out with Susan to the Burlington Arcade reflects Mayhew’s opinion of that locale.) Another source of local colour is Bradshaw’s Illustrated Hand Book to London and its Environs 1862, recently republished by Conway.

For more about coining I turned to the records of the Old Bailey. Williamson is over-optimistic about the sentence coiners might expect – looking at sentences around this time we see Thomas Ferryman (Sept 1858) receiving five years for what seems to have been an extensive amount of forgery. Richard Pike (Jan 1859) was given four years for forging shillings, while Joseph Pomeroy (Jan 1860) got ten years for forging sixpences. However, the same records suggest that convictions for coining were rare. As Michael suggested when the police raided them, it was essential for the police to find actual coining equipment to get a prosecution. It was much more common, therefore for people to be prosecuted for possessing or passing the coins. Here, sentences were much lighter. In the summer of 1859 most of those convicted got a sentence of only a few months or one or two years, although sentences for repeat offenders were much higher. This is presumably the reason that Williamson saw it as not being a particularly serious offence.

Passing banknotes was, for all the reassurance Williamson gave to people using them to pay for funerals, taken more seriously. In 1857 William Stone got five years for passing a forged fiver, while Joseph and Thomas Collins both got ten years (although they both seemed to have been heavily involved in forgery). Forging the notes meant even longer sentences: in 1857 John Bolyne got fifteen years for forging £5 notes. Interestingly, despite this, Michael’s concern about forging £10 notes was not shared by many others. Mayhew says that forged tenners were quite common.

The forging of foreign currency was also surprisingly common in London with Turkish and Russian money being produced in quantity by some forgers.

It was not unusual for juries to recommend mercy and sentences to be reduced on this account. I’ve seen no suggestion that the death of a child would incline juries to clemency although mercy might be recommended on lots of grounds – for example, ‘being a stranger to the country’ or extreme old age. Eliza Clark (May 1862) received a much reduced sentence because the jury considered her to have been ‘the tool of another person’. Williamson might have believed the assurances that he was giving to bereaved parents.

Ever since I learned that Karl Marx used to cabal with his Communist comrades in Great Windmill Street, I have always hoped to read more about his life in London. Marx is as I imagined him from Francis Wheen’s immensely readable biography. His concerns about money and the unfortunate Mr Biskamp are reflected in his published correspondence with Engels.

A nice overview of this time and place is provided by Liza Picard’s Victorian London. For more about life on the farm in Devon [where the story starts], you can read Henry Stephens’ Book of the Farm. This excellent work would have enabled anybody at the time to establish a model farm and Mr Slattery was obviously guided by its precepts.

Back Home has just been republished. It’s available as a paperback or e-book and you can find it at https://mybook.to/Back_Home.