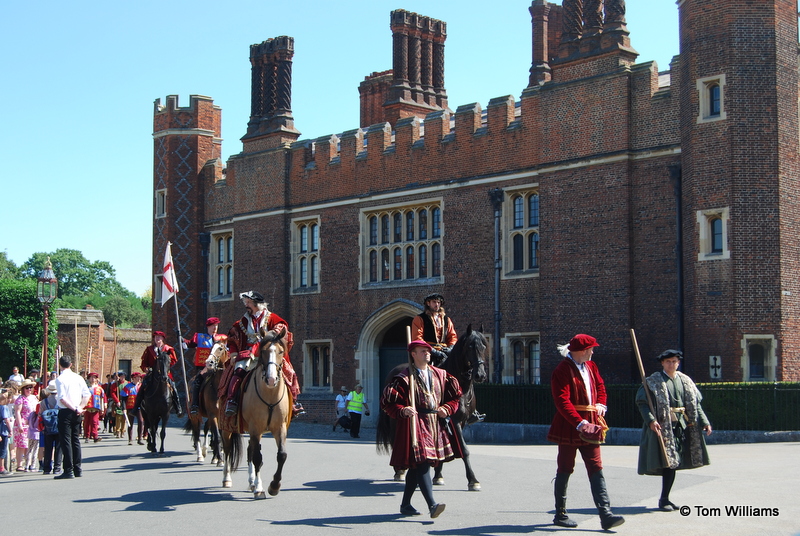 This summer we have been tourists in our own city. We bought a season ticket to the historic royal palaces and worked our way through them. Most (though not all) were places we had visited before, but it was lovely to go back, often after many years. We are lucky in London to have so many fabulous old buildings – despite this the Fire of London and the Blitz.

Last week’s blog was long and had no pictures. Unsurprisingly, not that many people tackled the 4,000 words (though if you are interested in seeing how Britain has been shaped by war, revolution and riot as much as by parliamentary debate, it’s worth a look). This week, by contrast, is going to be mainly about pictures as I share some of the photos we took over our tourist summer.

I was very privileged to be a guest of the Yeomen Warders to see the Ceremony of the Keys, when the Tower is locked up for the night. Sadly, I wasn’t allowed to take photographs during the ceremony but here is a picture of the White Tower (the oldest part of the castle) taken on another visit. And here is one of the corridors in that tower.

One of the things I love about the Tower is just how much you have the sense of being inside a great castle – almost like in the movies. Actually, though the fortress is real enough, many of the towers on the inner walls were demolished as the building was adapted to different uses across the centuries. A lot of the ones we see now were rebuilt in the 19th century when Wellington was the constable of the tower and made sweeping changes to restore it to something approaching its original appearance. A great things about going to the Ceremony of the Keys was getting to see inside the Tower at night. It’s spectacularly atmospheric but, again, opportunities to take photographs were very limited so I’m afraid this is all I can offer. From outside, Kensington Palace looks like a dull brick building. The view out into Kensington Gardens is much more impressive than the view from the gardens toward the house. Inside, though, the building is fascinating. Like almost all these old palaces (the Tower of London is a really good example) it has grown over the years. Kensington Palace was once a small suburban villa called Nottingham House. King William (of William and Mary) was asthmatic and wanted to move away from the smoke of Whitehall to what was then the rural retreat of Kensington. He bought Nottingham House and, with the aid of Christopher Wren, set about turning it into a palace, moving in in 1689. Since then it has been continually added to and (unlike the other royal palaces we visited this summer) it is still a royal residence. It’s so big that Prince William and his family have their home in one of the wings at the back, well away from the bits that are open to tourists.

There are some very beautiful rooms. This is the King’s Gallery. Dating from 1695, it is where William, recovering from a riding accident, caught a chill (supposedly from sitting at an open window) which led to his death in 1702. The ceilings at Kensington are particularly spectacular. The King’s Staircase provides an amazing entrance to the early 18th century Georgian part of the palace. The walls are painted with pictures of actual people who lived and worked there. For many people, especially this year on the 200th anniversary of her birth, Kensington Palace is particularly important as the childhood home of Queen Victoria. The room where she was born has been restored and furnished to give some idea what it was like at the time.

Hampton Court Palace is huge. Essentially, there are two palaces: the famous Tudor palace of Henry VIII and an almost completely separate building built for William and Mary in the late 17th century. The ceiling is amazing. This is one of the state rooms in the ‘modern’ (William and Mary) part of the palace. It’s equally splendid, albeit in a very different way.

Hampton Court is surrounded by gardens. We visited on one of the ridiculously hot days that we had this summer but the gardens, next to the Thames and with a long canal designed as a decorative feature, were surprisingly cool and pleasant.

The gardens are historically important in their own right but, by the nature of gardens, they have changed a lot over the centuries. The grand Privy Garden, though, has recently been lovingly restored to close to its 18th century appearance. That’s enough of my holiday snaps for one week. I’ll be back again next week. I post something on this blog a little over once a week on average, but I don’t make a penny out of it. If you enjoy reading the blog, the only thing I ask is that you buy one or more of my books. The cheapest of my books on Kindle costs just 99p. There is information on all my books, with buy links, on this website: http://tomwilliamsauthor.co.uk/my-books/

Alternatively, can I suggest that you look at the ‘Buy me a coffee‘ button and consider a donation? Ironically, the app doesn’t take donations as low as 99p and you don’t even get a book out of it, but I suspect that some people might find the idea of a straightforward donation easier than buying a book they may never read.